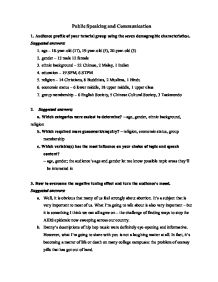 Public Speaking and Communication 1. Audience profile of your tutorial group using the seven demographic characteristics:. Suggested answers: 1. age - 18-year-old (17), 19-year-old (5), 20-year-old (3) 2. gender - 13 male 12 female 3. ethnic background - 22 Chinese, 2 Malay, 1 Indian 4. education - 19 SPM, 6 STPM 5. religion - 14 Christians, 8 Buddhists, 2 Muslims, 1 Hindu 6. economic status - 6 lower middle, 18 upper middle, 1 upper class 7. group membership - 6 English Society, 5 Chinese Cultural Society, 3 Taekwondo 2. Suggested answers; a. Which categories were easiest to determine? ~ age, gender, ethnic background, religion b. Which required more guesswork/enquiry? ~ religion, economic status, group membership c. Which variable(s) has the most influence on your choice of topic and speech content? ~ age, gender; the audience's age and gender let me know possible topic areas they'll be interested in 3. How to overcome the negative tuning effect and turn the audience's mood. Suggested answers: a. Well, it is obvious that many of us feel strongly about abortion. It's a subject that is very important to most of us. What I'm going to talk about is also very important - but it is something I think we can all agree on - the challenge of finding ways to stop the AIDS epidemic now sweeping across our country. ...read more.

ii. Pointer Phrases - e.g. Now here is an important fact... iii. Oratorical Emphasis - e.g. dramatic pauses, vocal inflection, changes in volume & the use of gestures iv. Visual Reinforcement - using visual aids to aid memory 4. Importance to maintain eye contact with the audience: Maintaining eye contact with the audience is the speaker's way of saying 'I'm aware of your presence, and I want to establish communication with you.' It is also an important means of establishing rapport with the audience; let people know you are interested in the feedback they give you as you deliver the speech; eye contact is used to determine the sincerity, credibility and confidence level of a speaker 5. What you have learnt and experienced in this course: a. What does public speaking mean to you? b. How do you feel if you are asked to give a speech to an audience? c. Have you gained the benefits (or achieved your goals) from learning public speaking? d. Of all that you have learned, what is the most useful and important to you? Suggested answers: a. It means talking to a group of audience, with constant eye contact to communicate ideas and make connections with the audience. b. Still feeling nervous but I'd accept the challenge to improve myself using the knowledge and skills in public speaking that I have learned. ...read more.

B. quoting out of context. C. citing unusual cases as typical examples. D. all of the above. v) Even though it is not easy to assess a speaker's goals, it is still necessary to ask ethical questions about those goals. True / False vi) The larger the audience becomes, the greater is the ethical responsibility of the speaker to be fully prepared. True / False 4. Impromptu Speech: Self-introduction Suggested answer: Good morning to everyone. My name is John Ooi Teck Leong, you can call me John or my nickname TL. My hometown is Sitiawan, Perak. My parents run a small family business in town. I have an elder sister and two younger brothers. When I'm free, I like to hang out with my friends, play basketball and watch the TV. I come to UTAR because I want to become an accountant, and my parents believe UTAR is the right place for me. In the future, I hope to become a successful accountant, run my own auditing firm, buy a big house for my family and travel around the world. That's all, thank you! 5. Famous & influential speakers of the world. Suggested answers: Mahatma Gandhi - political & spiritual leader of India who fought for independence Aung San Suu Kyi - freedom fighter of Myanmar Sir Winston Spencer Churchill -Prime Minister of the U.K. during WWII John F. Kennedy - 35th President of the USA (1917-1963) Martin Luther King - civil rights activist, USA (1929-1968) 2 ...read more.