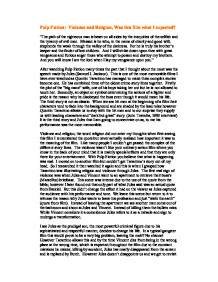 PulpFiction: Violence and Religion, Was this film what I expected?

Pulp Fiction: Violence and Religion, Was this film what I expected? "The path of the righteous man is beset on all sides by the inequities of the selfish and the tyranny of evil men. Blessed is he who, in the name of charity and good will, shepherds the weak through the valley of the darkness. For he is truly his brother's keeper and the finder of lost children. And I will strike down upon thee with great vengeance and furious anger those who attempt to poison and destroy my brothers. And you will know I am the lord when I lay my vengeance upon you." After watching Pulp Fiction many times the part that I thought about the most was the speech made by Jules (Samuel L Jackson). This is one of the most memorable films I have ever watched as Quentin Tarantino has managed to make three complex stories become one. ...read more.

The first real sign of violence was when Jules and Vincent went to an apartment to retrieve their boss's (Marsellus) briefcase. This scene was intense due to the use of the quote from the bible; however I later found out that only part of what Jules said was an actual quote from Ezekiel. But this didn't change the effect it had on the viewer as Jules captured the audience with his performance and tone. We leave this scene but return to it to witness the reason why Jules wants to leave his profession and just "walk the earth" (quote from film). Instead of leaving the apartment we see another man come out of the bathroom and shoot at Jules and Vincent. Instead of killing them the bullets miss. While Vincent considers it a coincidence Jules refers to it as a miracle and sign to undergo a transformation. I see Jules as the prodigal son, the most powerful criminal figure due to his sophisticated and respectful manner, decides to change his life. ...read more.

The events that made Jules want to change his path in life are directly linked to a briefcase that we never new what it contained. A gamble however it wasn't necessary for us to see. He was the righteous man and the gun he was holding was the shepherded protecting him from the valley of darkness, death. But after that morning he thought it could be that Ringo was the righteous man, he was the shepherded and the world was evil and selfish. He knew this wasn't true though, the truth was that Ringo was weak and he was the tyranny (leader) of evil men but the point is that he was trying to be the shepherded and with doing so emptied his wallet and paid for another mans life. I expected this film to end in a bloody gun fight instead it ended with the loved up robbers leaving with Jules' money and the question of did this film crush all our expectations of it and have a moral message? ...read more.