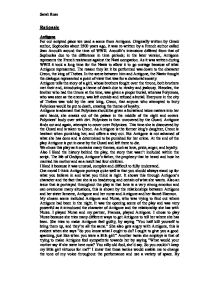 For our scripted piece we used a scene from Antigone. Originally written by Greek author, Sophocles about 2500 years ago, it was re-written by a French author called Jean Anouilh around the time of WWII. Anouilh’s intensions differed from that of Sophocles due to the difference in time periods; in the later version, Antigone represents the French resistance against the Nazi occupation. As it was written during WWII it took a long time for the Nazis to allow it to go onstage because of what Antigone represented. The reason they let it be performed was down to the character Creon, the king of Thebes. In the scene between him and Antigone, the Nazis thought the dialogue represented a point of view that was for a dictatorial society.

Antigone tells the story of a girl, whose brothers fought over the throne, both brothers met their end, introducing a theme of death due to rivalry and jealousy. Eteocles, the brother who had the throne at the time, was given a proper burial, whereas Polynices, who was seen as the enemy, was left outside and refused a burial. Everyone in the city of Thebes was told by the new king, Creon, that anyone who attempted to bury Polynices would be put to death, creating the theme of loyalty.

Antigone is adamant that Polynices should be given a burial and takes matters into her own hands, she sneaks out of the palace in the middle of the night and covers Polynices’ body over with dirt. Polynices is then uncovered by the Guard. Antigone finds out and again, attempts to cover over Polynices. This time she is discovered by the Guard and is taken to Creon. As Antigone is the former king’s daughter, Creon is hesitant when punishing her, and offers a way out. But Antigone is not ashamed of what she has done and is determined to be punished for her crime. At the end of the play Antigone is put in cave by the Guard and left there to die.

We chose this play as it contains many themes, such as love, pride, anger, and loyalty.

Also I liked the history behind the play, the story that wasn’t included within the script. The life of Oedipus, Antigone’s father, the prophecy that he heard and how he married his mother and as a result had four children.

I liked it because it was unusual, complex and difficult to fully understand.

One moral I think Antigone portrays quite well is that you should always stand up for what you believe in and what you think is right. It shows this through Antigone’s character and the fact that she is so headstrong and certain of what she wants. Also an issue that is portrayed throughout the play is that love is a very strong emotion and can overcome many situations, this is shown by the relationships between Antigone and her sister Ismeme, Antigone and her nurse and Antigone and her fiancé Haemon.

My chosen scene included Antigone and Nurse, who was trying to find out where Antigone had been in the night. It was the opening scene of the play and was very powerful as it introduced the character of Antigone and the relationship she has with Nurse. I played Nurse and my partner, Frances, played Antigone. I chose to play Nurse because she tries many different ways to get Antigone to tell her where she has been. She tries to make Antigone feel guilty, by saying “You half kill yourself to bring them up, and they’re all the same.” She also gets angry with Antigone, this is evident when she says “do you know what I ought to do? I ought to give you a good spanking, just like when you were a little girl.” Another tactic she employs is that of trying to make Antigone feel sympathetic towards her by saying “What would your mother say if she were here now? You silly old fool, she’d say. So you couldn’t keep my little girl virtuous for me?” I knew that these tactics would enable me to change the tone of my voice throughout the performance and use a variety of space. By playing Nurse I intended to portray the relationship that Antigone and Nurse possessed. I also wanted to improve on my interaction as an actor and by playing this part it enabled me to build on what I was already capable of.

When I first read the scene I imagined the two characters in a grand bedroom that had a very old fashioned interior, such as what one would expect to see in a stately home. A room that was quite cluttered with elaborate ornaments and decorative pieces. Obviously this would be hard to create on a small stage and also it would restrict the amount of space that was available for moving in.

Our devised piece was based on many themes taken from Antigone, such as loyalty, cruelty and pride but the main theme was anger. I chose to base it upon anger because there are many different ways to portray it and there are lots of different ways of dealing with it. This gave me a wide range of options to choose from when devising the piece.

I researched anger and it’s causes and came up with many different results, for instance:

There are three different types of anger:

When writing my devised piece I wanted to put across that you should let out your anger and stand up for what you think is right so I decided on a story line that contained a young girl (Harriett) who knew what she wanted but was too scared to stand up for herself. This resulted in her becoming angry internally, but she was unable to let go of her anger and express herself. So I created another character that only she could hear. This character was the internal anger that Harriett was feeling, and tried to make her see that she had to let go of her anger and stand up for herself rather than being pushed around by everyone else because she was an easy target. I chose to play an emotion instead of a person because I wanted to portray the differences between each aspect of the emotion.

I wanted to create three sections on the stage so we weren’t just using a small part of it, however still allowing for use of most of the space available.

I also wanted to create a strange atmosphere, one that makes the audience feel uncomfortable, so they could relate to Harriett’s feelings. I wanted the tempo to vary too, as I wanted Harriett’s character to be quiet and subdued, and the character that played her anger to be loud, intimidating and patronising. I also wanted the rhythms to alternate to make the piece more interesting for the audience.