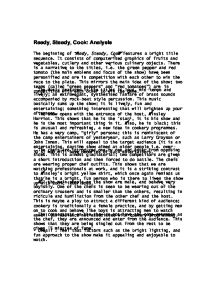 Also, he is black; this is unusual and refreshing, a new idea in cookery programmes. He has a very camp, "girly" persona; this is reminiscent of the camp entertainers of yesteryear, such as Larry Grayson or John Inman. This will appeal to the target audience (it is an entertaining, daytime show aimed at older people i.e. over-30's) who will have memories of such entertainers. The chefs are introduced one by one and enter from opposing sides. This is almost gladiatorial; two competitors are given a short introduction and then forced to do battle. ...read more.

This is maybe a ploy to attract a different kind of audience; cookery is traditionally a female practice, and by getting men on to cook and behave like boys is attracting men to watch aswell (an audience not associated with cookery programmes). The contestants on the show do not have the same entrance as the chef, they are announced and enter from the audience. This shows that they are being singled out from the rest to be given '5 minutes of fame'. Oveall I feel that factors such as the bright lighting, and fun approach to the show make it appealing and enjoyable to watch. ...read more.