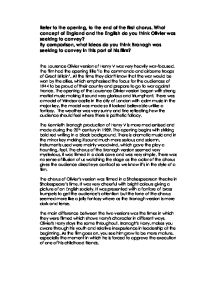 Refer to the opening, to the end of the first chorus. What concept of England and the English do you think Olivier was seeking to convey?

Refer to the opening, to the end of the first chorus. What concept of England and the English do you think Olivier was seeking to convey? By comparison, what ideas do you think Branagh was seeking to convey in this part of his film? The Laurence Olivier version of Henry V was very heavily war-focused. The film had the opening title 'To the commando and airborne troops of Great Britain'. At the time they didn't know that the war would be won by the allies, which emphasised the focus for the audiences of 1944 to be proud of their country and prepare to go to war against France. ...read more.

The weather was very sunny and fine reflecting how the audience should feel where there is pathetic fallacy. The Kennieth Branagh production of Henry V is more modernised and made during the 20th century in 1989. The opening begins with striking bold red writing in a black background. There is dramatic music and in the minor key making it sound much more serious and solemn, instruments used were mainly woodwind, which gave the play a haunting, feel. The chorus of the Branagh version seemed very mysterious, it was filmed in a dark cave and was very simple. ...read more.

It was presented with a fanfare of brass trumpets to get the audience's attention but the tone of the chorus seemed more like a jolly fantasy where as the Branagh version is more dark and tense. The main difference between the two versions was the times in which they were filmed which shows Harry's character in different ways. Olivier's Harry stays the same throughout. Branagh's Harry, makes you aware through his youth and relative inexperience in leadership at the beginning. As the film goes on, you see him grow to be more mature, especially the moment in which he is forced to approve the execution of one of his childhood friends. ...read more.