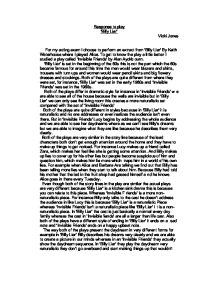 Response to the play 'Billy Liar'.

Response to play 'Billy Liar' Vicki Jones For my acting exam I choose to perform an extract from 'Billy Liar' By Keith Waterhouse where I played Alice. To get to know the play a little better I studied a play called 'Invisible Friends' by Alan Ayckbourn. 'Billy Liar' is set in the beginning of the 60s this is not the part which the 60s became famous for around this time the men would wear blazers and shirts, trousers with turn ups and women would wear pencil skirts and big flowery dresses and stockings. Both of the plays are quite different from where they were set, for instance, 'Billy Liar' was set in the early 1960s and 'Invisible Friends' was set in the 1980s. ...read more.

Both of the plays are very similar in the story line because of the lead characters both don't get enough attention around the home and they have to make up things to get noticed. For instance Lucy makes up a friend called Zara, which makes her feel like she is getting some attention. And Billy makes up lies to cover up for his other lies but people become suspicious of him and question him, which makes him lie more which traps him in a world of his own lies. For example when Alice and Barbara Are talking we find out that Billy has been telling more lies when they start to talk about him. ...read more.

The way both of the plays present the daydream in very different forms for example in 'Billy Liar' Billy describes his dreams very clearly and we are able to create a picture in our minds whereas in an 'Invisible Friends' they actually show the daydream sequence. In 'Billy Liar' they play the daydream very naturalistic they don't go overboard and start making things up that wouldn't happen but in an 'invisible friends' thy totally over act and make the scene look very unreal. The playwrights for 'Billy Liar' will have lost the chance to make the play extra ordinary and couldn't add things that wouldn't happen in daily life but they were able to get issues out to the people and add a little bit of comedy on the way. ...read more.