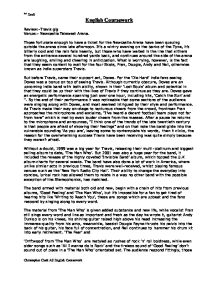 Review of a Travis gig at Newcastle Telewest Arena.

English Coursework Review:-Travis gig Venue:- Newcastle Telewest Arena. Those fortunate enough to have a ticket for the Newcastle Arena have been queuing outside the arena since late afternoon. It's a wintry evening on the banks of the Tyne, it's bitterly cold and the rain falls heavily, but those who have waited in the line that slithers from the entrance several hundred yards back, and continues around the side of the arena are laughing, smiling and cheering in anticipation. What is worrying, however, is the fact that they seem content to wait for the four Scots, Fran, Dougie, Andy and Neil, otherwise known as indie superstars Travis. But before Travis, came their support act, Doves. For the 'Die Hard' indie fans seeing Doves was a bonus on top of seeing Travis. Although currently obscure, Doves are an upcoming indie band with both ability, shown in their 'Lost Souls' album and potential in that they could be up their with the likes of Travis if they continue as they are. Doves gave an energetic performance spanning just over one hour, including hits, 'Catch the Sun' and ''. By the end of their performance it was noticeable that some sections of the audience were singing along with Doves, and most seemed intrigued by their style and performance. ...read more.

Dunlop is on his knees, his shining guitar raised high above his head increasing the immense quality from his amp, meanwhile, bassist Dougie Payne thrusts his pelvis into the back of his guitar, his face full of concentration, and Neil continues to hammer his drum kit into early retirement. 'The Fear' and 'Driftwood' from 'The Man Who' are restyled as rushes of rock 'n' roll boldness, while even older songs such as 'All I wanna do is Rock' and the tireless sound of 'Good Feeling' don't sound out of place in a 'The Man Who' orientated set. The audience respond fittingly, those who don't know all of the words opting for hands in the air, jumping up and down dancing instead. It is now what seems like an age, but is in fact a period of 5 years since Travis were opening up for the god's of Oasis. Travis shows have now grown immeasurably in stature, proved by a U.K arena tour selling out at a vast pace. Flourishing sales have given the quiet Scots and irrepressible confidence and boldness that was occasionally absent in the past. And with a string of award ceremonies on the horizon, including the 'Brit. ...read more.

His willingness to share his deepest feelings and thoughts together with a vulnerability that makes him even more engaging. It is Fran's ability to see all things simply for what they are, as in the basic choruses of songs such as, 'Turn', 'Sing' and the new track 'Safe' which can be the most bizarre thing about Travis, though live, and backed by several thousand screaming voices, this simplicity makes sense. Fran then politely asks the audience to help him with the next track. He claims the song has 'Totally ruined his voice' and it gets worse each time he sings it, he then duly introduces the track, 'Turn'. Travis finish with three favourites, 'Turn', 'Sing' and the unmistakable 'Why does it always rain on me?', all three tracks sang, word for word, by the most-part of the fans who seemed simply amazed and intrigued by how great the sound of Travis live really was. After just 45 minutes, a length of time, which will leave many moments of extreme value with those who attended, and as with the proverb, the time seemed to fly by, Travis brought the curtain down on a concert which undoubtedly gives a higher standard of expectancy on future releases by the Scottish quartet. 3rd Draft 3rd Draft Christopher Clark AS English Coursework Christopher Clark AS English Coursework ...read more.