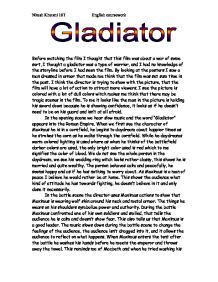 Before watching the film I thought that this film was about a war of some sort, I thought a gladiator was a type of warrior, and I had no knowledge of the storyline before I had seen the film. By looking at the posters I saw a man dressed in armor that made me think that the film was set sum time in the past. I think the director is trying to show with the picture, that the film will have a lot of action to attract more viewers. I see the picture is colored with a lot of dull colors witch makes me think that there may be tragic scenes in the film. To me it looks like the man in the picture is holding his sword down because he is showing confidence, it looks as if he doesn't need to be on his guard and isn't at all afraid. In the opening scene we hear slow music and the word "Gladiator" appears into the Roman Empire. When we first see the character of Maximus he is in a cornfield, he begins to daydream about happier times as he strokes the corn as he walks through the cornfield. ...read more.

The director used these names for us (the audience) to reflect upon and think about. When we first see commodos in the coach there are lighting effects, one moment he's in the light (good side) and the next he's in the dark (bad side), this in a way signified that he was two faced. This makes the audience nervous and suspicious of that character. By looking at commodos eyes I noticed that they where difficult to see into, they were set into his face and where very dark. Eyes say a lot but in this case they didn't reveal anything. Commodos hair is black, where as his father Marcus's hair is showing in the battle and we see that it is snowy white. When Commodos is sword fighting he tends to show of and uses poses, he knows he is safe. I think the audience would feel that commodos came into the story conveniently late. The use of language is very important to director for example when we first see Maximus he speaks English. The language spoken by the people they are fighting is a mixture of languages, fake languages as well as Germania (made up country). As a member of the audience I would want to be on Maximus's side because he brings me closer to him as he speaks English. ...read more.

Most of the people who Maximus fights wear masks because this makes Maximus feel as if he's killed SOMETHING and not someone. After the fight Maximus is tied up that image looked like Jesus, someone suffering for no reason. Ridley Scott used that image because he must have had his audience live in America, Christians. The effect created by the red flower petals (poppies) is war and blood. Commodos's armor is white, he looks more like a statue. He wants himself to look like a god. It makes him look like a statue of a roman god. The director created this effect because it is more remote from the audience. In conclusion I think Ridley Scott presents the character of Maximus as a popular, calm and brave soldier because he is comfortable with other people and he is a noble warrior. I as an audience feel sympathy for him because he is an underdog, he is a good man but bad things follow him. The director felt it was important to justify the violence because he wants you to think that it is more serious then just the blood and fighting. I think the director was successful in getting his message across to the audience because it made me think about violence. Nitesh Khetani 10T English coursework ...read more.