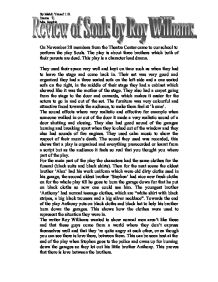 Review of souls by Roy Williams

On November 28 members from the Theatre Center came to our school to perform the play Souls. The play is about three brothers which both of their parents are dead. This play is a character lead drama. They used their space very well and kept on time such as when they had to leave the stage and come back in. Their set was very good and organized they had a three seated sofa on the left side and a one seated sofa on the right, in the middle of their stage they had a cabinet which showed like it was the mother of the stage. They also had a carpet going from the stage to the door and onwards, which makes it easier for the actors to go in and out of the set. ...read more.

They used calm music to show the respect of their mum's death. The sound they used was recorded, this shows that a play is organized and everything prerecorded or learnt from a script but as the audience it feels so real that you thought you where part of the play. For the main part of the play the characters had the same clothes for the funeral (black suits and black shirts). Then for the next scene the oldest brother 'Alex' had his work uniform which were old dirty cloths used in his garage, the second oldest brother 'Stephen' had nice new fresh cloths on for the whole play till he goes to burn the garage down for that he put on black cloths so now one could see him. ...read more.

The writer Roy Williams wanted to show normal men aren't like these and that these guys come from a world where they don't express themselves well and that they 're quite angry at each other, even though you can see there is love there, between them. This can be seen best at the end of the play when Stephen goes to the police and owns up for burning down the garages so they let out his little brother Anthony. This proves that there is love between the brothers. As a member of the audience I enjoyed watching the play and thought they acted very will, they raised a very good issue to the audience which is to love each other and that running away from home can cause a lot of trouble and loss of love. By Mahdi Yousef 11R Drama Mrs. Joughin ...read more.