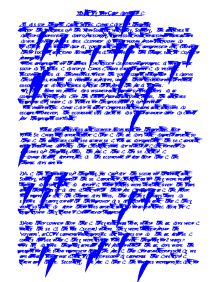 Road by Jim Cartwright - Notes on the plot and Subject matter of the play.

Road by Jim Cartwright Notes on the plot and Subject matter of the play Under the guidance of the Rum-Soaked, wide-boy, Scullery, the audience is taken on an evening tour of a scruffy, depressed road in a small Lancashire town. Moving from street corner to living room, from bedroom to kitchen, the inhabitants, young and middle aged, are presented, showing their socially and emotionally wretched lives in this sharp, sad but often funny play. Here are people with almost no decent economic prospects living in a soon to be ghost town yet most have enough spirit to resist becoming ghosts themselves. Even the young couple who plan to starve themselves, unable to visualise a future, make their decision with relish, executing a tender dance of death before the fats begins. By the time we follow two women and a pair of brothers to a compulsive drinks-fest in the shell of an abandoned house, the audience desperately want to believe in the possibility of survival. The main subject matter is about repressed dreams and a desire to escape. However, the economic obstacle is too high a mountain to climb for the people on Road. Theatrical devices and conventions used in the production 1)The Set was like a roundabout that the actors had to push around so that the audience could see a new set. The actors pushed the set around using brash metal rods that looked sinister which fitted in well to themes of the play. Also, the fact that the set didn't automatically turn reflects the economic situation that the characters are in. ...read more.

=Jean Heaton, a miners wife said, 'Now I am 32 I suppose I'm just a housewife still to look at me from the outside. But inside I'm a very angry person, and I shall stay angry until we've got rid of this rotten government and the rotten system it makes us live under.' Falkland Islands =A British crown colony (Since 1892) in the South Atlantic Ocean. =From 1764 France, Spain, Britain and Argentina founded settlements and laid claims to the Islands =Following the Argentine invasion of the Island in April, Britain quickly sent a task force to protect the 1,200 inhabitants. =The Islands were recaptured in June when the Argentine force surrendered, after fighting in which more than 1,000 lives were lost. Community Charge =This was the poll tax that replaced domestic taxes as the local tax and was introduced in Britain in 1990. =It was to be paid by all adults at a fixed rate; the tax was exceptionally unpopular and there were unusually high levels of unemployment. =It was associated with Margaret Thatcher's administration Privatisation =The sale or transfer of public or state-owned assets or services to the private sector. The policy was adopted by Thatcher's government in the 1980's. =The aim was to reduce government spending and to try to create greater efficiency by freeing market forces from government intervention. =Privatisation led to the Miner's Strikes and caused people to lose their jobs, have stricter working hours and smaller pay packets. =The unions lost a lot of their power. ...read more.

Molly: very similar to Jerry - both reminiscing but Molly speech is a bit more up beat and she does not appear to be as sad as Jerry. It is obvious that she has Alzheimer's. She is very shaky showing her age and her rhymes are very simple which gives it a sad tone. She does reminisce like Jerry but in a more cheerful way but when you realise that she has Alzheimer's her cheerful reminisces are seen through. Jerry is talking to the audience but she is talking to herself. Red lipstick and make up. And finds herself very amusing but then turns sad very quickly. Erratic emotions. More poignant. She does a dance which reminds herself of her dancing days. Her posture is very awkward and all hunched up showing her age. Skin Lad Moves with the rhythm. Even though the pace of this speech is evidently a lot faster than the other Molly and jerry it is still about how lonely he is, 'And I'm the lonely skinhead again.' - he can't stay still he is wandering up an down the stage. Swearing shows context of where he is. Showing when people have nothing to do in their lives they turn to violence. Clare dies her last breaths are very audible and when she dies a bit of hope for the characters also die inside the audience. Got closer as scene goes on. Vocal - Lots of Pauses - helped me to understand mood and communicated feeling to me. Physical - The actors closeness and distance within the space to indicate mood and tensions created. -The moments of stillness served as an effective contrast and gave the feeling of nostalgia. ...read more.