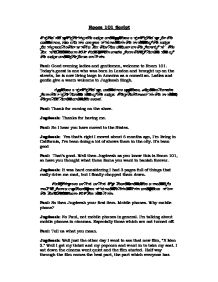 Room 101 Script Lights role up lighting the stage and applause sign lights up for the audience, two chairs are positioned in the middle of the stage facing each other with a box that has a leaver on the front of it. The box is labelled Room 101. Paul Merton enters from the left hand side of the stage and light focus on him. Paul: Good evening ladies and gentlemen, welcome to Room 101. Today's guest is one who was born in London and brought up on the streets, he is now living large in America as a comedian. Ladies and gentle give a warm welcome to Jugdeesh Singh. Applause sign lights up, audience applause, Jugdeesh enters from the right hand side of the stage. They both meet in the middle, they shale hands and take seats. Paul: Thank for coming on the show. Jugdeesh: Thanks for having me. Paul: So I hear you have moved to the States. Jugdeesh: Yes that's right I moved about 6 months ago, I'm living in California, I've been doing a lot of shows there in the city. ...read more.

Just as he says it the guy in the seat directly behind you's phone goes off and you miss what he says. Paul: Oh god. What did you do? Jugdeesh: I actually felt like getting up and thumping the guy in the face. I didn't believe it. That wasn't the only time as well. The idiot didn't turn his phone off. Paul: What even after that? Jugdeesh: Yeah, he just left it on and it kept on ringing. I paid five pounds to hear a phone ringing. If I wanted that I would have gone to the T-Mobile shop around the corner Paul: And that would have been free Jugdeesh: Exactly. I couldn't believe. Paul: Well I think there are many people out there that agree with you. I certainly do. So there you have it mobile phones in cinemas should go in Room 101. Paul pulls the leaver attached to the box and sound affect of a mobile phone ringing play and audience applause and laugh. Paul opens the cupboard behind him to reveal three models. Paul: So then to your second item or shall I say items. ...read more.

So what is it? Jugdeesh takes a stuffed teddy in the shape of a cat out of the cupboard placed directly behind him. He places it on the box facing the audience Paul: Cats. Why do you want to get rid of cats forever? Jugdeesh: Well cats are no good for anything. In the mornings you feed them and then they go out and come back for food again. What use is a pet like that? I can understand why people would want to keep dog, for protection. But cats what good are they, all they do is cost you money. Paul: I have to say I hate cats as well. And for all you cat owners I'm sorry but cats are defiantly going into Room 101. Audience applause, Paul pulls the leaver and the teddy, shaped as a cat drops into the box. Paul: Well that is it for today's show, thank you to our guest Jugdeesh Singh and thank you for tuning in, join us for next week's show were our guest will be David Beckham Audience applause the shows music starts to play. Paul and Jugdeesh shake hands, their talking is drowned by audience's applause. Lights slowly fade out and the show ends. ...read more.