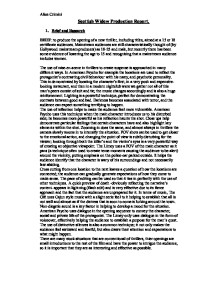 Scottish Widow Production Report. 1. Brief and Research BRIEF: to produce the opening of a new thriller, including titles, aimed at a 15 or 18 certificate audiences. Mainstream audiences are still characteristically thought of (by Hollywood mainstream producers) as 18-25 and male, but recently there has been some evidence of lowering the age to 15 and recognising that a mainstream audience includes women. The use of mise-en-scene in thrillers to create suspense is approached in many different ways. In American Psycho for example the locations are used to reflect the protagonist's contrasting civil behaviour with his nasty, and psychotic personality. This is demonstrated by locating the character's first, in a very posh and expensive-looking restaurant, and then in a modern nightclub were we gather not all of this man's peers consist of suit and tie; the music changes accordingly and is also a huge reinforcement. Lighting is a powerful technique, perfect for demonstrating the contrasts between good and bad. Darkness becomes associated with terror, and the audience can expect something terrifying to happen. The use of reflection helps to make the audience feel more vulnerable. American Psycho uses this technique when the main character introduces us to his disturbed side; he becomes more powerful as his reflection haunts the shot. Close ups help demonstrate particular feelings that certain characters have and also highlight key elements within the shot. Zooming in does the same, and almost always in thrillers the camera slowly zooms in to intensify the situation. ...read more.

In terms of location, most of the sequence was to be filmed in a church - such a setting is perfect for the narrative and even more so in respect to the magnificent d�cor and connotations of holiness that it brings. The rest of the sequence however, would be in a setting that most reflects the protagonists normal lifestyle, so in order for location to maximise this sense the most appropriate setting would be the home. The home is comforting, safe, and a definite place of normality so these characteristics associate themselves with the said character and allow the audience to feel unthreatened by him. We had no intention of favouring over which sex the mainstream production should be aimed at, the hope was that it was suitable for anyone as there is no gender dominance and only one character introduced. 3. Constructing the Production As we began to edit the sequence following unsuccessful filming on several accounts, it became apparent that due to filming problems beyond our control we needed both to rewrite the narrative and again do further filming. This set us back immensely and we found ourselves filming closer and closer to the final deadline. The problems consisted of many things from unreliable group members to inefficient equipment and limited time available in which to film a well lit sequence. Though the narrative did not change too radically, we still had to endeavour in finding new uses of the useful footage we had, and merge it with the new shots to produce a plausible production. ...read more.

There are quite a few improvements I would make to the production if given the chance, such alterations would definitely better the opening and would probably make all the difference to the final evaluation. There should have been more intrigue induced over the character in the first location, with possible links through the use of props to the next; giving a personality that could contrast with her behaviour inside the graveyard. There is also the problem of shot length: on several accounts, for example in the first shot in which I walk down the stairs, the editing cuts too early or too late; creating a lacked a sense of completion to it. Also, the framing of shots could have been bettered like in the final two in which a transition merges them together; if the shots were both framed evenly the effect would have seemed greater and more professional. Finally the music in the first location wasn't totally perfect. Although the track itself is very powerful in evoking character, it was only a thirty second long sample so we had to repeat it in order to fit the length of the first scene which is quite a noticeable error. The finished production turned out to be a lot better than we thought it would, and considering the problems and errors we were faced with, the production has been effective at creating meaning and generating response and is suitable for a thriller. Alice Crimini ...read more.