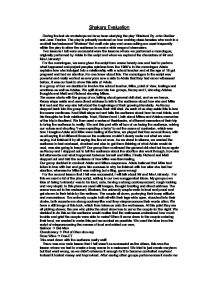 Shakers Evaluation During the last six workshops we have been studying the play 'Shakers' By John Godber and Jane Thorton. The play is primarily centered on four working class females who work in a cocktail bar/restaurant "Shakers" But multi-role-play and cross cutting are used frequently within the play to allow the audience to meet a wide range of characters. Two lessons I felt were successful were the lessons where we performed a monologue, originally performed by Adele in the script and when we explored the characters of Mr and Mrs Untrendy! For the monologue, we were given the script form scene twenty-one and had to perform what happened and project peoples opinions from the 1980's. In the monologue Adele explains how she indulged into a relationship with a school teacher and at the age of 16 got pregnant and had an abortion. No-one knew about this. The monologue in the script was powerful and really worked as everyone saw a side to Adele that they had never witnessed before, it was our task to show this side of Adele. In a group of four we decided to involve the school teacher, Mike, point of view, feelings and emotions as well as Adeles. We split down into two groups, Kacey and I, showing Adeles thoughts and Matt and Richard showing Mikes. ...read more.

My groups own idea of being 'untrendy' was to be loud, rude, having a strong cockney accent, rough looking and very stupid. In this piece we used still images, thought tracking and direct address. The scene was set in the restaurant, Shakers; the untrendy couple waltz in loud and proud and get shown to their table by the waitress. The couple sit down, portraying their lousy attitude and mannerisms. The untrendy couple both sit with their legs wide open, slouched into their chairs, both accents are strong cockney-like and they mispronounces their words often. We have a still image of this look, which then takes us onto the waitresses. At this point they are all picking straws; the one who picks the short straw has to serve the couple for the night. We decided to do this so the audience would realise that the waitresses understood how much trouble and grief the couple were able to make! When it came down to the couple ordering their food, we wanted to make this part as comical as possible. We used the idea from the script of mispronouncing the names of food and added our own; Salmon --> Sal-Mon Chardonnay --> Pint of Char-don-nay Rose Wine --> Ros-ET This went down with the audience really well! There was one main lesson that I felt wasn't as successful as the others, this was the lesson where we had to create a busy scene in a restaurant. ...read more.

The group managed to maintain a fast and steady pace, which made the audience feel excited as well as exhausted, even though they were only watching! They way group finished was brilliant, by completely stopping the scene with a waitress being flopped onto a chair. The pace came to a halt, which made the audience look on in disbelief and even relief! I have really enjoyed studying Shakers. In the play the audience encounter many different characters, which I thought was fun and varied to explore the individual characteristics of social groups. The characters showed the diversity of 1980's English city life. The play shows the real backgrounds of peoples lives; showing that the majority of the time being a full-time waitress isn't through choice, but because they have no other option. With the play not having a proper storyline this gave it a real sense of excitement as well as confusion. As the audience you were not sure on what was going to happen next; where a scene would end or who the next scene would be based upon. To be able to play John Godbers plays successfully, an actor needs to be versatile. They need to be able to take and swap between different physical forms with ease and remember the mannerisms for each different character. The characters are sometimes to an extreme so the actor needs to be able to act as different people and apply all of their skills. By Sarah Foley ...read more.