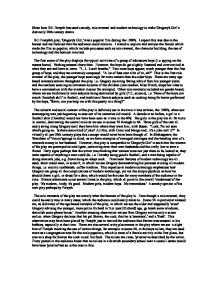 Show how Bill Forsyth has used comedy, role reversal and modern technology to make 'Gregory's Girl' a distinctly 20th century drama. Bill Forsyth's play, 'Gregory's Girl,' was a popular film during the 1980's. I expect this was due to the honest and real humour that the audience could relate to. I intend to explore and analyse the factors which made the film so popular, which include processes such as role reversal, the character building, the use of technology and the humour involved. The first scene of the play displays the typical activities of a group of adolescent boys (i.e. spying on the nurses home). Nothing unusual there then. However, the boys do get slightly flustered and over-excited at what they see and have to leave. "I...I...I can't breathe." Two more boys appear, much younger than the first group of boys, and they are extremely composed. "A lot of fuss over a bit of tit, eh?" This is the first role reversal of the play, the younger boys seemingly far more mature than the older boys. There are many age based reversals strewn throughout the play, i.e. Gregory receiving 'dating advice' from his younger sister, and the teachers seeming as immature as some of the children (one teacher, Miss Welch, stops her class to have a conversation with the window cleaner for example). ...read more.

electric toothbrush, coffee machine. This expertise at modern technology emphasises how Gregory can grasp all the complications of modern technology, yet not the simple psychics on how he should charm a girl, or dress for a date, which would be the case for many members of the audience at the time. Blatant statements occur several times in the play, which all point to the overall 'moderness' of the play. 'It's modern, Andy, it's good. Modern girls, modern boys. It's tremendous.' A sneaky opinion of his own play perhaps by Forsyth. The role-reversals of the play are exactly what the humour of the play is. Even though a role-reversal, they could be easily true in many cases, which the audience could easily relate to. Scene 36 in particular amused me, as did many of the age-based reversals of the play, in which we see the older and supposedly 'wiser' Gregory advising the younger, more polite Richard to 'Act your [Richard] age, go break some windows, demolish some phone boxes.' Another amusing observation we see from Gregory arrives only a scene earlier, when Gregory declares that his pal Steven, the cook, that he is 'unnatural,' and a 'freak'. This observation may have been placed by Forsyth just to remind the audience that Steven was unusual in his hobbies, especially at that time. ...read more.

The reason for this I would very much gather is that the younger generation of today fail to realise the ironies of the play as there are none, because the mould of sexual stereotyping has been entirely ripped open. I expect this was why I found the age-based reversals far more amusing. Despite this, there are still many quirks which helps it to retain its appeal, because still many home truths lurk inside this play, but they are just a lot more obvious in today's society then they were. The play helped the audiences of the 1980's carefully explore the possibility that roles are interchangeable, and have no set points. Now these observations are obvious, and don't have as much significance to today's audience. I have to say that the characters of the play, especially the clumsiness of the boys are frankly endearing, and the control and boldness of the girls is quite amusing, although it no longer holds the refreshing glance that it undoubtedly had at the time. Despite this, it still has a very insightful and witty script, that will probably remind us of not only how this country was, but also the kinds of dilemma's such as young love that will still be prominent in every persons lives for years to come. ...read more.