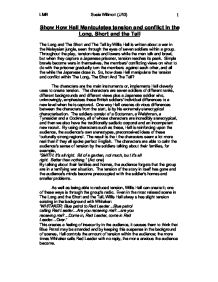 Show How Hall Manipulates tension and conflict in the Long, Short and the Tall

Show How Hall Manipulates tension and conflict in the Long, Short and the Tall The Long and The Short and The Tall by Willis Hall is written about a war in the Malaysian jungle, seen through the eyes of seven soldiers within a group. Throughout the play, tension rises and lowers while the men talk and brawl, but when they capture a Japanese prisoner, tension reaches its peak. Simple brawls become wars in themselves, the members' conflicting views on what to do with the prisoner gradually turn the members against each other, and all the while the Japanese close in. So, how does Hall manipulate the tension and conflict within The Long, The Short And The Tall? The characters are the main instruments or, implements Hall cleverly uses to create tension. The characters are seven soldiers of different ranks, different backgrounds and different views plus a Japanese soldier who, unknowingly, emphasises these British soldiers' individual differences to a new level when he is captured. One way Hall creates obvious differences between the characters from the start, is by his extremely stereotypical characterisation. The soldiers consist of a Scotsman, a Welshman, a Tynesider and a Cockney, all of whose characters are incredibly stereotypical, and then we also have the traditionally sadistic corporal and an incompetent new recruit. ...read more.

An example of a Tynesider's peculiarity of dialogue is: 'WHITAKER: Why don't you keep quiet, Bamforth man!' Whitaker's use of 'man' at the end of the sentence is very much like a stereotypical Tynesider would, so his accent and regional use of words creates prejudice in the audience. The audience imagines a Tynesider to be a workingman, industrial with a tough life and sarcastic sense of humour. Bamforth is the London Cockney; he is violent and has a rude sense of humour. He uses rhyming slang and an example of his cockney figures of speech is: 'BAMFORTH: ...Show him a rice pudding and he gets the screaming ab-dabs.' This quotation shows Bamforth insulting Whitaker; his use of cockney insults inflicting anxiety on the audience as their prejudice of Bamforth causes them to fear him, especially when he is angry. As well as this, Hall uses slang from the Army, such as '...Fred Karno's mob.' or '...bint'. These slang words are unique to the soldiers and the men within the play use this type of slang with pride. This causes the audience to believe in the characters and situation a lot more than if they used formal English because the audience feels that they are being let in to an exclusive group. ...read more.

They hated the thought of this because they would have to 'look into his eyes'. In other words they believe that killing with a gun is easy because the bullet kills the person not the person shooting the gun or even the gun itself, this idea distances the murderer from the crime. In the same way, war masks the fact that thousands of people die, when there is a war, we expect there to be casualties and deaths. But because these happened in a war they seem so much less personal than if someone died in a fire or in a car crash, however the Long the Short and the Tall is saying that these are people who die in wars, not just soldiers, they are people with families, lives, friends and their own ideas about their pasts and their futures. The question Hall is trying to make the audience ask themselves through all this tension is one of human dignity; is it acceptable to kill people in a war situation? Are the soldiers who kill, murderers or people 'doing their duty' for their country? And lastly why should people who have been forced to abandon their lives also be forced to either kill or be killed? Is this not against even the most basic human morals? 1 LMB Susie Willmott (U10) ...read more.