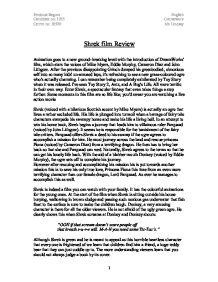 Shrek film Review Animation goes to a new ground-breaking level with the introduction of DreamWorks' film, which stars the voices of Mike Myers, Eddie Murphy, Cameron Diaz and John Lithgow. After the previous disappointing Grinch dumped his greenbodied, obnoxious self into so many kids' un-amused laps, it's refreshing to see a new grass-coloured ogre who's actually charming. I can remember being completely exhilarated by Toy Story when it was released. I've seen Toy Story 2, Antz, and A Bug's Life. All were terrific in their own way. Enter Shrek, a spectacular fantasy that even takes things a step further. Some moments in this film are so life like; you'd swear you are watching a live action movie Shrek (voiced with a hilarious Scottish accent by Mike Myers) is actually an ogre that lives a rather secluded life. His life is plunged into turmoil when a barrage of fairy tale characters stampede his swampy home and make his life a living hell. ...read more.

It has the colourful animations for the young ones. At the start of the film when Shrek is sitting outside his house burping, wallowing in brown sludge and passing such noxious gas underwater that fish float to the surface is sure to make the children laugh. Donkey, a very amusing character is there for all the older viewers. He is not afraid of the ugly green ogre. He clearly shows this when Shrek screams at Donkey and Donkey shouts: "OOH if that scream doesn't scare people off that breath s-u-r-e will. M-A-N you need some Tic-Tac's." Although Shrek is green and he is meant to appeal as this horrible heartless character that every one is frightened of we learn that children find him a friend, a huge teddy bear that they can just cuddle up to. The more understanding viewers learn that you should not always judge a book by its cover. Eddy Murphy, now he is an actor of many different roles. ...read more.

As the film gradually moves on he becomes a more funny character and is a rather patient person to cope with Donkey. Mike Myers certainly kept the mood going with his constant moaning at Donkey and his mission to get his quite and lonely swamp back. Princess Fiona (Cameron Diaz) had a very sturdy character. Cameron Diaz did a good job as playing the weak voiced princess when she was locked up in the tower. Princess Fiona's glass shattering, high pitched voice she had performed when she was tuning to the bird was a very amusing part of the film. The audience got the feeling at first of just a normal happy, cheerful person but then a sudden change of mood when that bird had burst whilst doing a duet with Princess Fiona. For me I do not think that Lord Farquaad really had that much of a character. He was just a normal villain. John Lithgow did however this villain voice well. I just did not feel as though for a character he had a strong personality that stood out. Ferdousi Begum English Candidate no: 1225 Coursework Centre no: 10520 Ms Lindsay 1 ...read more.