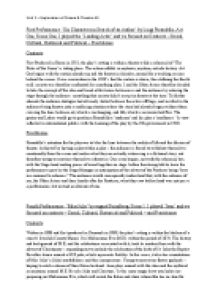 Six Characters in Search of an Author by Luigi Pirandello, Act One, Scene One, I played the Leading Actor and we focused on Contexts

﻿Unit 1 ? Exploration of Drama & Theatre AS First Performance: ?Six Characters in Search of an Author? by Luigi Pirandello, Act One, Scene One, I played the ?Leading Actor? and we focused on Contexts ? Social, Cultural, Historical and Political ? Practitioner Contexts First Produced in Rome in 1921, the play?s setting is within a theatre while a rehearsal of ?The Rules of the Game? is taking place. The action unfolds in anytown, anytime, outside history. Act One begins with the curtain already up and the theatre in disorder; normal for a working session behind the scenes. It was convention in the 1920?s that the curtain is down, thus defining the fourth wall: society was therefore confronted by something alien. I and the Other Actors therefore decided to take the concept of this idea and break all divisions between us and the audience by entering the stage through the audience: something that society didn?t accept in theatre at the time. To further alienate the audience dialogue had all ready started between the actors offstage, and resulted in the audience being thrown into a confusing situation where the story had already begun without them: crossing the lines between art, which is unchanging, and life, which is an inconstant flux. The gentry and Ladies would go to proclaim Pirandello a ?madman? and his play a ?madhouse.? A view reflected in international politics with the banning of the play by the UK government in 1928. Practitioner Pirandello?s intention for the play was to blur the lines between the reality of life and the illusion of theatre. Achieved by having a play within a play ? the audience is forced to withdraw themselves emotionally from the scene and realise what they are actually witnessing is a fictional story: not therefore trying to convince themselves otherwise. Our scene begins, not with the rehearsal, but, with the Stage-hand nailing pieces of wood together on stage: before then being told to leave the performance space by the Stage Manager ...read more.

He sees it as a ?game.? ? An opinion that upsets the Producer and the other actors. During his apology ? ?I?m sorry ? your artistry! Your art!? ? I quickened my speech pattern to exaggerate this point. However he does not give up on telling his truth, as he and his family are the readymade characters ? the actual story. The Father concludes to ask ?in all seriousness? (to the Producer) ?who are you?? With this in mind I decided, that for these sentences, a new speech pattern must be used to generate a subtext of defiance against his earlier submission; in accepting acting was not a game. As the question posed to the Producer is of colloquial language, I spoke in a simple and to the point style ? making the most of the moment and letting the audience contemplate it. Fifth Performance: ?Miss Julie? by August Strindberg. I played ?Jean? and we focused on Characterisation, Non ? Verbal Communication and Language Characterisation Given the circumstances of Jeans central objectives to resist Miss Julie?s (Julie) advances, at this moment, I thought it wise to use hot seating to get into his mindset. I knew that three facts must be kept in mind at all times ? which can be described as circles of attention. These, thoughts-in-the-head, were: his role as a servant (1); Jean?s commitment to Christine (2); His lust for Julie (3). Circles of Attention 1 (Role as a Servant) represents his core/main objective 2 (Commitment to Christine) represents his second outer/less central objective 3 (His lust for Julie) represents the final outer/less central objective When asked during hot seating: ?What is Jean?s objective in this scene.? I replied that my character?s role was split into three units. At first he is the stereotypical servant that knows his place ? not allowing himself to engage in flirtatious conversation with Julie: ?I remember one time especially ? no, I oughtn?t to mention that.? Later, (Second Unit) ...read more.

As each monarchy is mentioned a spotlight, first stage right then left, shines onto where they would be ? thus concluding the insanity of Jean. Stage Plan Jean Interpretation When I first analysed my chosen text I immediately cut out sections so that it was direct, from ?Yes if you like. It was absurd. Look? to ?look.? as the opening line. The punctuation used by Strindberg only featured one exclamation mark. I changed this, by adding more, so that a powerful and verging on mentally tormented Jean was created. I felt this adapted style wouldn?t have an adverse effect on the playwright?s intensions. This conclusion was derived from the repetition of the word ?you? four times ? this style of language suggests a subtext that Jean has a particular problem with someone; in my version, the audience. Vocal Awareness I start my scene with a clear style that intends to express to the audience the situation that Jean has found himself in. My voice has a tone of expiration that therefore leads to a higher pitch and faster pace ? with an emphasis on the word ?Look? from the starting sentence (?Look, this was the story I didn?t want to tell you?) immediately creates a subtext that the audience is somehow to blame; increasing their attention as they wish to find out why. My projection ranges in volume ? the intention to produce another subtext that Jean is anguished mentally. My use of inflection, in pitch range, expresses this point prominently in the sentence: ?No, you don?t.? The ?No? and ?you? I both delivered in a higher pitch and in a loud volume, upon ?don?t? I delivered in a deeper pitch and a lower volume. Articulation was at the forefront of my mind ? making sure I spoke with diction to fully utilize the moment. Sources *Miss Julie Preface page 91 Miss Julie Study Guide complied by Sarah McAfee Six Characters in Search of an Author AS Drama Student Book http://www.britannica.com/EBchecked/topic/461518/Luigi-Pirandello http://www.kirjasto.sci.fi/strindbehtm http:/en.wikipedia.org/wiki/August_Strindberg http:/extrapris.com/astrindberg.html Word count 3208 ? 208 3000 ...read more.