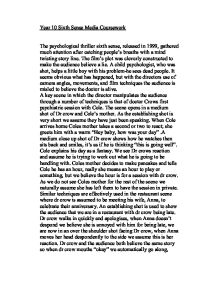 The psychological thriller sixth sense, released in 1999, gathered much attention after catching people’s breaths with a mind twisting story line. The film’s plot was cleverly constructed to make the audience believe a lie. A child psychologist, who was shot, helps a little boy with his problem-he sees dead people. It seems obvious what has happened, but with the directors use of camera angles, movements, and film techniques the audience is misled to believe the doctor is alive.

A key scene in which the director manipulates the audience through a number of techniques is that of doctor Crows first psychiatric session with Cole. The scene opens in a medium shot of Dr crow and Cole’s mother. As the establishing shot is very short we assume they have just been speaking. When Cole arrives home Coles mother takes a second or two to react; she greets him with a warm “Hey baby, how was your day” .A medium close up shot of Dr crow shows how he watches then sits back and smiles, it’s as if he is thinking “this is going well”. Cole explains his day as a fantasy. We see Dr crows reaction and assume he is trying to work out what he is going to be handling with. Coles mother decides to make pancakes and tells Cole he has an hour, really she means an hour to play or something, but we believe the hour is for a session with dr crow. As we do not see Coles mother for the rest of the scene we naturally assume she has left them to have the session in private.

Similar techniques are effectively used in the restaurant scene where dr crow is assumed to be meeting his wife, Anna, to celebrate their anniversary. An establishing shot is used to show the audience that we are in a restaurant with dr crow being late. Dr crow walks in quickly and apologises, when Anna doesn’t despond we believe she is annoyed with him for being late, we are now in an over the shoulder shot facing Dr crow, when Anna moves her head despondently to the side we assume this is her reaction. Dr crow and the audience both believe the same story so when dr crow mouths “okay” we automatically go along, with what we believe his reaction to be, that he realises she is annoyed. Dr crow then goes onto how he is working with Cole, as he does the camera moves to an interview shot which makes us feel like she is more involved. The atmosphere in the restaurant is cheerful and when the next table along sound a loud laugh (dieagetic sound), Anna looks across, as we can see Dr crow it looks like she is looking at him but really she is looking straight through him. Anna sighs and looks up saying “happy anniversary”, she leaves without another word looking upset, we believe she is being slightly sarcastic when saying happy anniversary, and is upset for him not making enough effort to be there on time, but really she is just upset for his death. As none of the extra characters make any notice of her being alone we have no reason to believe otherwise.

The director successfully combines elements of the plot with film techniques to convince the audience that dr crow is alive. When we see dr crow alive in Coles house we automatically believe we have gone back in time to when the man that killed him was his patient, when in fact they are completely different people. The enigma- is dr crow dead or alive? , works itself out at the end, as the audience where no wiser to think about him in fact being dead, it is the shock and mind twisting which will make it remembered for future generations.