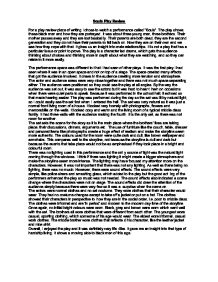 Souls Play Review For a play review piece of writing I chose to watch a performance called "Souls". The play shows these black men and how they are portrayed. It was about three young men, three brothers. Their mother passes away and they are lost basically. Their parents are both dead, they are the second generation and they do not have their parents to fall back on. Now they are on their own and we see how they cope with that. It gives us an insight into male relationships. It is not a play that has a particular issue or point to prove. The play is a character led drama, which gets the audience thinking about choices and thinking more in depth about what they are watching, and so they can relate to it more easily. The performance space was different to that I had seen of other plays. ...read more.

It looked very homely with photographs, flowers and memorabilia on the walls. It looked cosy and warm and the living room of a typical middle class family. It had three walls with the audience making the fourth. It is the only set, as there was not room for another. The set sets the scene for the story as it is the main place where the brothers' lives are taking place; their discussions, dinners, arguments etc. The use of furniture like the couch, table, dresser and personal items like photographs create a huge effect of realism and make the storyline seem more authentic. The colours used for the room were quite dark and dull, like brown wallpaper and armchairs. This compares well to the storyline, not because the storyline is dull and dark but because the events that take place would not be as emphasised if they took place in a bright and colourful room. ...read more.

The actors were normal clothes and no set costume. They wore clothes that their character would wear. They had no costume changes except to take off a jacket or put on a hat. The clothes showed their characters in perspective to how they are in the social order, i.e. poor to middle class. The clothes were informal and are 'in period' and modern to the modern day time of the storyline. Once again, no initial bright colours were worn. Black, grey and brown were worn which went well with the set. The brothers all wore clothes that were different from each other. The youngest wore casual, sporting clothing, which someone of his age would wear. The eldest wore informal, casual work clothes. The middle brother wore clothes that reflected his character, like the leather jacket and nice shirt. Overall, I enjoyed the play and it was definitely very life-like. It gave me an insight into that type of hardship living. It shows a moving side to black men of this age. ...read more.