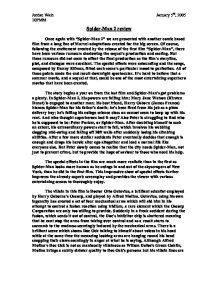 Spider-Man 2 review Once again with "Spider-Man 2" we are presented with another comic based film from a long line of Marvel adaptations created for the big screen. Of course, following the excitement created by the release of the first film "Spider-Man", there have been various rumours shadowing the sequel's production and casting. But these rumours did not seem to affect the final production as the film's storyline, plot, and dialogue were excellent. The special effects were astounding and the songs, composed by Danny Elfman, fitted each scene's particular mood to perfection. All of these points made the end result downright spectacular. It's hard to believe that a summer movie, and a sequel at that, could be one of the most entertaining superhero movies that have been created. The story begins a year on from the last film and Spider-Man's got problems a plenty. In Spider-Man 2, his powers are failing him; Mary Jane Watson (Kirsten Dunst) is engaged to another man; his best friend, Harry Osborn (James Franco) ...read more.

The villain in this film is Doctor Otto Octavius, a brilliant scientist employed by Harry Osborne's Oscorp, and played by Alfred Molina. Octavius, using his own ingenuity has created a set of four mechanical arms which will aid him in his attempt to control a fusion reaction using tridium, a rare element which the Oscorp Corporation are only too willing to provide. Suddenly in a freak accident during the fusion, which sends it out of control, the Doc's inhibitor chip is shattered meaning that he cant stop the arms from taking over control and as a result starts to succumb to the madness seemingly induced by the mechanical arms. There is a brilliant scene which shows Doc Ock talking to himself about voices in his head while at the same time the menacing looking arms are hanging round his head snapping their claws seemingly in anger at what he is saying. Although Alfred Molina's Doc Ock is not as maniacally villainous as Willem Dafoe's Green Goblin, Molina brings a subtly sinister quality to Doc Ock's persona but his villain lines are still very unconvincing. ...read more.

Maguire handles this very well, as can be seen, and you can believe him to be the comic book nerd while at the same time can also imagine him as being a super-hero. I believe that this movie was altogether very good and is great fun for all ages and types of film. This is because it caters for so many different genres of film; it involves a bit of romance, great action sequences, and the occasional funny scene which has everyone in fits of laughter. But the ending is a great disappointment as during the film it left too many loose ends so at the end there are various endings which seem to unnecessarily draw it out as they all have to be tied off right at the end. This results in a lot of confusion at the end of the film where you are left unsure as whether to get up and leave or whether the film is not yet finished and there is another one or two more scenes to go. But despite this minor drawback the film is great fun for everyone and Spider-Man remains every comic book geek's dream. ?? ?? ?? ?? Jordan Wain January 5th, 2005 10PMM ...read more.