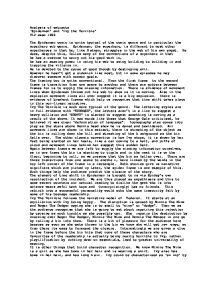 'Spiderman' and 'Ivy the Terrible'

Analysis of extracts 'Spiderman' and 'Ivy the Terrible' Y12 exam 1999 The Spiderman comic is quite typical of the comic genre and in particular the superhero sub genre. Spiderman, the superhero, is different to most other superheroes in that he, like Batman, struggles in the web of his own angst. He does, despite this, follow many of the conventions of a superhero in that he has a costume to carry out his good work in, he has an amazing power in using his web to swing building to building in and trapping the villains in. He is devoted to the cause of good though by destroying evil. However he hasn't got a sidekick like most, but in some episodes he may discover someone with common goals. The framing too is quite conventional. From the first frame to the second frame is transition from one scene to another and there are gutters between frames for us to supply the missing information. There is evidence of movement lines when Spiderman throws out his web to show us it is moving. Also in the explosion movement lines all over suggest it is a big explosion. there is evidence of breakout frames which help us recognise that time shift takes place in this non-linear narrative. Ivy The Terrible is much more typical of the genre. The lettering styles are in full evidence with "KERRASH", the letters aren't in a line to suggest a heavy collision and "SHOVE" is slanted to suggest something is moving as a result of the shove. ...read more.

There is a bit of pleasure for the audience here because as soon as she gets thrown in the bin we know she will get revenge, so from there its easy to forecast the closure. Interestingly we are given a clue in the frame before the bin hits that none of these characters who are favourites of the readership is actually being really horrible to Ivy, rather playilification by cutting down on essentials, lead to greater universality of meaning. It is other things that build character recognition. We know Minnie The Minx is a girl as she has bows in her hair and is wearing a skirt. Ivy also has bows in her hair, and has long hair. Ivy could be characterised as 'an imp' by Meehan in her female character types, the dungarees she wears accentuate this. She doesn't behave as a society would expect a young girl to behave, she does not follow the cult of femininity. Dennis has his jagged hair and Roger The Dodger has his chequered jumper. They never wear different clothes so character recognition is now instant. The use of red and black has now been accepted as the sign for mischievous behaviour. In Spiderman the people are much more life like, they represent one person. The narrative in Spiderman is much more complex, with the relationships between frames being much more difficult to understand. ...read more.

degree of empathy and individual focus is built of with Ivy, so the audience will cheer as she establishes the new status quo in which her battle has been won at the end. All this makes the narrative believable, and the chain of events is logical, all this ensures good audience response. The simple linear closed single strand narrative for which we as audience are voyeur makes such a storyline approachable for a younger audience. Spiderman identifies with its potential target audience by building up a degree of empathy with Peter Parker who is now clearly struggling in the web of his own angst. Spiderman clearly offers its audience escapism from mundane things, with the explosions and numerous characters that have a difference to mark them out from society, so by looking at ethnology and the various groups like the resigned poor and the struggling poor they will find a world away from their own by reading Spiderman. Maybe some people may identify with how Peter Parker struggles in life, he is never free. Children read Spiderman for fantasy and action as their parents often prevent them from having an element of action in their lives, so the narrative doesn't have to be so believable, which is normally essential if a comic is to give the audience pleasure. The two comics do follow typical genre traits but are very different in their methods and in how narrative and characters are constructed, but both I feel are equally effective. ...read more.