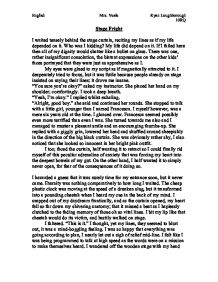 Stage Fright I waited tensely behind the stage curtain, reciting my lines as if my life depended on it. Who was I kidding? My life did depend on it. If I failed here then all of my dignity would shatter like a bullet on glass. There was one, rather insignificant consolation, the blatant expressions on the other kids' faces portrayed that they were just as apprehensive as I. My eyes were glued to my script as if magnetically attracted to it. I desperately tried to focus, but it was futile because people already on stage insisted on saying their lines: it drove me insane. "You sure you're okay?" asked my instructor. She placed her hand on my shoulder; comfortingly. I took a deep breath. "Yeah, I'm okay." I replied whilst exhaling. "Alright, good boy." she said and continued her rounds. She stopped to talk with a little girl, younger than I named Francesca. ...read more.

I thought, yet my lines, they seemed to blurt out, it was a mind-boggling feeling. I was so happy that everything was going according to plan, I nearly let out a sigh of relief mid-line. I felt like I was being programmed to talk at high speed as the words were on a mission to make themselves heard. I wandered off the wooden stage with my head held high, and the I saw was dainty little Francesca, who did her trademark grin and more importantly, gave me a thumbs-up, which satisfied me no end. I carried on through the rabble of the backstage area and joined my pack of mates. "Dude you rock!" exclaimed Michael. He gave me a high-five. "Heh, thanks." I said, with a failing attempt to be humble. It was almost an honour to be recognized in such a light by Michael, the proverbial 'leader' of the pack. ...read more.

"OI! MICHAEL! LEAVE THEM ALONE OR ELSE!" came the loud yell of my instructor. Michael gradually released Francesca and (with his gang tagging along) trudged along to the far-side of the room. A few minutes later, we all had to go on stage together to bow for the audience to mark the end of the performance. Luckily, as we went out, Michael was a good distance away. We all put our hands together, and produced a magnificent bow, which was greeted with rapturous applause. I caught a glimpse of my mum and dad, and my face lit up. Once the performance was over, I got my stuff together and ran out to see my mum and dad, I found them and charged up to them, they greeted me with open arms. "Good job!" my dad said (he appeared very proud), and ruffled my hair. "I'll look forward to next year's!" my mum assured. "Yeah, me too." I murmured, and as we trotted out of the theater, I looked back and noticed Francesca, all smiles with her parents. THE END English Mrs. Veale Ryan Loughborough 10RQ ...read more.