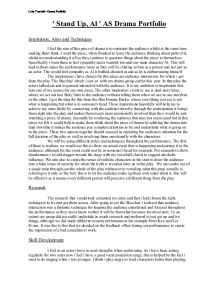 ' Stand Up, Al ' AS Drama Portfolio

' Stand Up, Al ' AS Drama Portfolio Inspiration, Aims and Techniques I feel the aim of this piece of drama is to entertain the audience whilst at the same time making them think. I want the piece, when finished to leave the audience thinking about parts of it, whilst not understanding it all so they continue to question things about the piece to themselves. Specifically i want them to feel sympathy and a warmth towards our main character Al. This will lead to them enjoy the performance more as they will be relating to him as a person and not just as an actor. The would feel sympathy as Al is bullied,shouted at and as he is embarrassing himself. The inspirations i have chosen for this piece are audience interaction, for which i got from the play 'The Bacchae' which i saw at with my drama group earlier this year. In that play the actors talked,sat and in general interacted with the audience. It is my ambition to implement this into one of my scenes for my own piece. The other inspiration i want to use is dual story lines, where we act out two Story lines to the audience without telling them when we are in one storyline or the other. I got the idea for this from the film Donnie Darko, where everything you see is not what is happening but what is in someone's head. These inspirations hopefully will help me to achieve my aims firstly by connecting with the audience directly through the participation it brings them right into the play and makes them much more emotionally involved than they would be just watching a piece of drama. ...read more.

By doing this it also seemed that my character took up more of the space just because of his presence this was to establish the fact that he was of a high status and many people respected him. Throughout the piece I tried to keep a very serious facial expression as that was the type of character i was playing very serious and efficient. I used facial expression at key moments for example when i was showing my disgust with Alex's performance i looked at him with dis-taste as if i was looking at something worthless as this was the audience was supposed to be feeling for Al. I also used my vocal tone to suggest the realism of the piece. For example when Al was performing in his stand up scene i spoke to the people next to me in a hushed voice as if they were really watching a stand-up comedy show. As i was playing a Comedy Manager/Mental Institution manager from North England i was not required to change or put on an accent. Instead i spoke with a very commanding and deeper than usual tone to show his status and experience. I felt that in my final performance i managed to perform as an actor to a higher standard than i would have been able to before the project started, but i do still feel there is room for me to improve. I think my character needs to be exaggerated more to show that he is a symbol of all the people who have bullied Al throughout his life and just a typical version of them. ...read more.

Final Review In terms of a piece of drama it was very successful we received lots of compliments from the audience and they found the piece very entertaining and funny. It terms of wether it got the reaction we were looking for it varied, we were very pleased to get the laughs at some of the places we did but at others it was not supposed to be funny, for future reference i will remember this and make sure we do something more clear to defiantly change the feeling in the audience. The audience participation worked very well as it kept them alert at all times and meant they were watching something a bit different to what they were used to. I think we fulfilled our aims that we set out to do in the beginning as it defiantly left the audience wondering as many of them after the show asked me what was in the box. And i can receive as well from the laughter throughout the piece that our other aim of getting them to sympathise with Al was successful as well, they wouldn't laugh at someone they didn't relate to and feel a certain warmth towards. From this project i have realised that you do need a varied group of actors as each can bring in their own certain skills and make a successful piece of theatre, you also need to approach it with an open mind and be willing to try things you might not at first like the sound of. The best thing to do is try because if you don't try things you will never get anywhere. STAND UP, AL AS Drama Devised Piece Portfolio Luke Tremlett Luke Tremlett - Drama Portfolio ...read more.