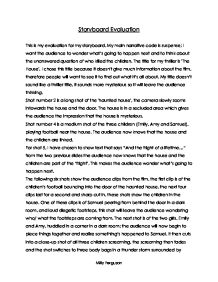 Storyboard Evaluation This is my evaluation for my storyboard. My main narrative code is suspense; I want the audience to wonder what's going to happen next and to think about the unanswered question of who killed the children. The title for my thriller is 'The House', I chose this title because it doesn't give much information about the film, therefore people will want to see it to find out what it's all about. My title doesn't sound like a thriller title, it sounds more mysterious so it will leave the audience thinking. Shot number 2 is a long shot of the 'haunted house', the camera slowly zooms intowards the house and the door. ...read more.

One of these clips is of Samuel peering from behind the door in a dark room, and loud diegetic footsteps, this shot will leave the audience wondering who/ what the footsteps are coming from. The next shot is of the two girls, Emily and Amy, huddled in a corner in a dark room; the audience will now begin to piece things together and realize something's happened to Samuel. It then cuts into a close-up shot of all three children screaming, the screaming then fades and the shot switches to three body bags in a thunder storm surrounded by police tape. The audience is now aware that the children have been killed; they are now in suspense of how/ why they die. ...read more.

My USP (Unique Selling Point) is posters, interviews, billboards and merchandise. I would expect my trailer to be shown before other thriller movies at the cinema. On TV I would show my trailer after 9pm because some shots may shock younger viewers. By putting up billboards, posters and showing my trailer, more people will be aware of the film and hopefully think that it looks interesting and want to see it. If my trailer was to be made I would know if it was a success by how many people actually went to see the movie and how many viewers viewed the programmes I showed my trailer before. One of the problems I faced when making my trailer storyboard was the drawing and trying to express my ideas in writing and pictures. ?? ?? ?? ?? Milly Ferguson ...read more.