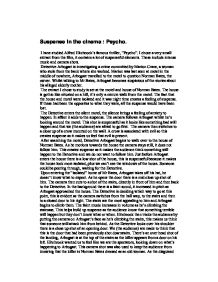 Suspense in the cinema : Psycho

Suspense in the cinema : Psycho. I have studied Alfred Hitchcock's famous thriller, "Psycho". I chose a very small extract from the film, it contains a lot of suspenseful elements. These include intense music and camera shots. Detective Arbogast is investigating a crime committed by Marion Crane, a woman who stole from the bank where she worked. Marion was last seen at motel in the middle of nowhere, Arbogast travelled to the motel to question Norman Bates, the owner. Whilst talking to Mr Bates, Arbogast becomes suspicious of the stories about his alleged elderly mother. The extract I chose to study is set at the motel and house of Norman Bates. The house is gothic like situated on a hill, it's only a minute walk from the motel. ...read more.

As he motions towards the house the camera stays still, it does not follow him. This creates suspense as it makes the audience think something will happen to the Detective and we do not want to follow him. Just before Arbogast enters the house there is a low shot of the house, this is suspenseful because it makes the house look more isolated, plus we can't see the windows of the house. Someone could be peering through, waiting for the Detective. Upon entering the "isolated" home of Mr Bates, Arbogast takes off his hat, he doesn't know what to expect. As he opens the door there is a mid close up shot of him. The camera then cuts to a shot of the stairs, directly in front of him and then back to the Detective. ...read more.

are made to think that this is the door that had been previously shot downstairs. There's an over head shot of the landing, Arbogast is at the top of the stairs as the killer appears from a door on his left. Hitchcock wanted us to feel like we are the spectators, looking down on what's happening to Arbogast. This camera shot was also used to keep the audience from knowing that the killer is Norman Bates dressed as an old woman. As the disguised Norman Bates stabs the shocked Detective there is aloud, pulsating sound. Arbogast then falls down the stairs, there is a close up shot of his face. The screeching sounds becomes more sharp and terrifying when he lands at the bottom of the stairs. The extract fades with the Detective being repeatedly stabbed. ...read more.