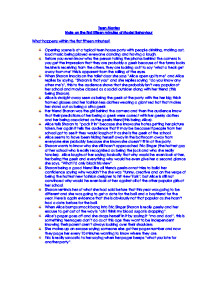 Teen Movies Note on the first fifteen minutes of Model Behaviour What happens within the first fifteen minutes? * Opening scene is at a typical teen house party with people drinking, making out, loud music being played everyone dancing and having a laugh. * Before you even know who the person taking the photos behind the camera is you get the impression that they are probably a geek because of the funny looks he/she is receiving from the others, they are looking as if to say 'what a freak get away from me' this is apparent from the rolling of the eyes. * When Sharon knocks on the toilet door she says "Alice open up its me" and Alice replies by saying, "Sharon is that you" and she replies saying "do you know any other me's", this to the audience shows that she probably isn't very popular at her school and maybe classed as a social outsider along with her friend (this being Sharon). * Alice is straight away seen as being the geek at the party with the her big thick framed glasses and her fashion less clothes wearing a giant red hat that makes her stand out as being a ultra geek. ...read more.

* Alice's pager goes off and she drops herself in it by saying it "mo and dad", this is something teenagers don't do as at this age they want to be independent knowing their parent aren't always looking over their shoulders. * She makes up an excuse saying someone else got her pager number and now they page her every 10 minutes wanting to know where they are. * Eric is really sarcastic to her saying when her pager beeps "what you late for another party". * When Eric says can I ask you anything Alice replies by saying "anything" expecting him to say he loves her and then he is really nasty and breaks her confidence even more. * From this point I expected to find that the end of the film would see Eric falling in love with Alice and dumping one of the popular girls for her. * From this early stage the director has shown a different perspective on this teen movie because normally you find that it is the guy that has to try and get the geeky girl to fall for him, but in Model Behaviour the director has chosen to have the geek already really like Eric and make him fall for her so the director has brought in a contrast. ...read more.

* When she finds out her mom is going to be gone for two weeks she is delighted and she shows it but quickly covers it up by saying "Oh I'll miss you guys". * She hates being the girl everyone is talking about and she wishes she could be like every other normal teenager. * From this point the audience gets the idea that each of the girls wish they were living the others lifestyle Alice just wanting to be noticed by the people at school as well as at home and Janine not wanting to be AS noticed. * Alice gets a letter saying that she has got through to the final round of her fashion competition but her dad isn't really that interested about it. * Her mom is happier about it but says for the interview to wear some newer clothes; this showing that even here mother notices she is different from other girls her age. * This is when the two girls meet and decide to swap places. * As the audience you expect the two girls to be found out and you expect them to like the others lifestyle and a twist to occur along. ...read more.