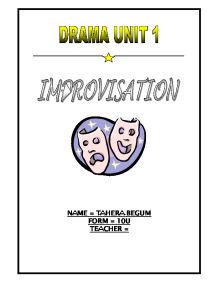 NAME = TAHERA BEGUM FORM = 10U TEACHER = They come in different shapes, sizes and forms, and can cost anything from your weekly pocket money to the thousands. As controversial and political as this maybe, as a society we are facing a new age war of DRUGS and all the consequences it brings with it. Our primary aim for the last half term was not only to extend our own personal knowledge about drugs, but also to delve deeper into this issue, and explore the feelings of people involved in this business and the people hurt or effected by it. Teenagers as a whole are seen as a completely different species to the rest of the human race. This is due to all the stereotyping and assumption based on supposedly typical adolescent behaviour. The way society views certain types of people or groups plays a large role, as this image can be a permanent one. One aspect, which has really stood out, is the fact that society always seems to view and label the extremes. What I mean by that is a teenager in many peoples point of view can never be normal or in between. They are either: ROUGH, RUDE STREETWISE, DRUGGIE TYPES or GEEKY, WEIRD, HIGH ACADEMIC ACHIEVERS Whichever way you look at both descriptions, they are characteristics, which can outcast you in society, and as a whole has the ability to outcast teenagers, as these are the images they are stuck with. Nevertheless, the out-casting of teenagers may seem like a very harsh and surreal outcome but in actual fact it often is the case in most British societies. It is a well-known fact that during the so-called teenage period, it is common for this age group to experiment with things and try to find their own individuality. However, the problem with teenagers ''finding their true identity'' is that it is often expressed in strong visual displays of grungers, gothic, punks and body piercing. ...read more.

For example we had the drug users on their knees as they are sniffing. We had the people who have been affected by it seriously on the floor to represent a feeling of lowness and depression the person is feeling. And the people who were craving for drugs we decided to have them at a mixture of levels for example at first they are all over the place in a frantic rage to find drugs then as they realised there is no drugs they start to deteriorate to the floor. When the time came to perform our health warnings to the class I really enjoyed all of them as the whole class depicted the dangers of drugs in different ways so there was a vast variety. However, one group in particular stood out, because I really loved the format of their actual performance as they decided to show their health warning in the form of a ''drug talk taking place in a rehab''. I particularly enjoyed this one as it showed people at different stages of their drug addiction problem and how they are getting over it, and I also felt this was effective because the audience get to hear why drugs are not good from people who have already experienced it. For quite some time there has been a lot of mixed feelings about the legalisation of cannabis. For this particular lesson we decided to bring to light everyone's point of view in a form of a debate. We each took on a persona of someone in a community for example anyone from a mother to a teenager. We then got separated into sections of 'for' and 'against' the legalisation of cannabis. This debate taught me a lot about the pros and cons of cannabis, it was really eye opening. This was because say for example we were against the legalisation of cannabis, but we were put into the section ''for'' legalisation of cannabis we were forced to think of reasons why this would be a good idea. ...read more.

I would link it together by having a very very short duologue with the next character. Looking back at the last half term, despite all the drama skills I did use I felt that there could have been more skills I may well have experimented with for example: * Miming * Slow motions * Accents Because this topic was more to do with situations and concentrated on characters a lot, I can't give a particular scene I would like to improve on. However, next time I would like to try another character role different to the one I undertook this time round. So instead of a mother I would like to be a drug dealer. I have also noticed that weI should really try and plan performances a bit better, because what we do in groups is discuss briefly the beginning middle and end, and then start with the acting. Next time I will definitely try my best to plan it, as it makes the performance more organised and I'm sure the timing would improve significantly as well. My main highlight this half term was most probably performing the composition of the monologues, I enjoyed it because it was something different and very realistic, there was no over acting and no melodramatic acting, so it was really believable and it felt as if we were drawing the audience in with our tone of voice. Yes there were things that we could improve on for example connecting the characters together in speech but as a whole I was quite content with the outcome. Overall, this half term has educated me in many ways, I have extended my knowledge on drugs and drug use extensively, I have found out things about drugs I never knew. But also I got a feeling of what it's like to be in the shoes of someone who is involved or affected by drugs. This is quite unusual as we are often on the outside looking into situations concerning drugs, but this time I got the chance to feel how it truly is like. ...read more.