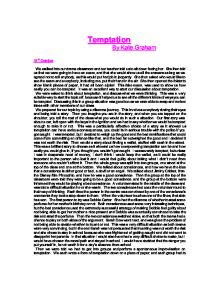 Temptation piece. We were asked to think about temptation, and discuss what we were thinking. This was a very suitable way to start the topic off, because it helped us to see all the different kinds of ways you can be tempted.

Temptation By Kate Graham 31st October We walked into our drama classroom and our teacher told us to sit down facing her. She then told us that we were going to have an exam, and that she would show us all the answers as long as we agreed not to tell anybody, as this would put her job in jeopardy. She then asked who would like to see the exam and everybody, including me, put their hand in the air. She then opened the folder to show blank pieces of paper, it had all been a joke! This fake exam, was used to show us how easily you can be tempted. It was an excellent way to start our discussion about temptation. We were asked to think about temptation, and discuss what we were thinking. This was a very suitable way to start the topic off, because it helped us to see all the different kinds of ways you can be tempted. Discussing this in a group situation was good too as we were able to swap and review ideas with other members of our class. We prepared for our topic by using a dilemma journey. This involves everybody closing their eyes and being told a story. Then you imagine you are in the story, and when you are tapped on the shoulder, you tell the rest of the class what you would do in such a situation. Our first story was about a car, left open with the keys in the ignition and we had to say whether we would be tempted enough to take it or not. This was a particularly effective choice of a story as it showed us temptation can have serious consequences, you could be in serious trouble with the police if you got caught. I was tempted, but I decided to weigh up the good and the bad ramifications that could come from committing an offence like that, and the bad far outweighed the good and I decided it was not worth the risk. ...read more.

Drug dealer played by Kayleigh Scott The drug dealer is not a very nice character. All she cares about is money and herself. She doesn't care about what happens to the people who buy her drugs, so long as nothing bad ever happens to her. The audience is supposed to dislike her, because of her uncaring, selfish personality. Good conscience played by Kelly Davison This character speaks to Kate and tells her she should not be taking drugs and stealing. Sadly, Kate doesn't listen right away, she gives in to temptation, but Kelly's character wins through in the end, and Kate begins to sort her life out. The audience is supposed to be able to see how she only wants the best for Kate, and we hoped that when the audience saw Kelly playing this part, they would understand that just like Kate's conscience, there are always people who are ready to help you. The good conscience is the embodiment of all Kate's doubts about taking drugs. She is there to convert Kate's thoughts into words, so that the audience can see the mental trauma Kate is going through. We created this character, by looking at Pinocchio, and more specifically at the character 'Jiminy Cricket', who plays a good conscience, his posture is quite straight, and the language he uses is gentle, he doesn't shout, or get angry. We decided Kelly should mirror this in her performance, using gentle movement, sweeping gestures etc, as it would be an excellent way of portraying a the character, and showing the strong moral backbone that the good conscience character has. We talked about the expressions Kelly should use, and decided that the best, would be a 'disapproving' look when the bad conscience spoke, and she saw that Kate was being tempted by the words the bad conscience spoke, and that a look of sadness would be appropriate when Kate gives in to the temptation. ...read more.

Self assessment First Objective 7/10 - I felt I showed a good understanding of practical skills and techniques Second Objective 7/10 - I thought I had developed an imaginative and relevant response to the task set Third Objective 16/20 - I felt that I created and sustained my role well throughout my performance Actual Assessment First Objective 7/10 - My teacher felt I had shown a good understanding of practical skills and techniques Second objective 6/10 - My teacher felt in order to score higher marks for this objective, I needed to move more. Third Objective 17/20 - My teacher thought I created and sustained my role very well Total Marks 30/40 or an A- I was very happy with the marks I received, although I felt I could have built my part up a bit more. I was slightly worried that if I did build up my part more, because of the length of our play, it would look like I was giving myself all the lines. I think the whole play needed to be built up a bit more, so we would all have much more dialogue. I also think that this would give other people in the group a chance to come out of their shells more, and really show their acting skills, like I tried to, even though I did not have one of the best parts, (which were the consciences, you could really have a chance to be an outrageous character and show you acting skills very well if you had one of these parts). Group Five Rhiannon Laybourne Donna Lakeman This group had some major problems with absences, and had to come back and perform this piece in their own time. I thought that the topic of temptation had shown us how temptation can come in many different forms, especially for people our age. I am very pleased with the progress of our group, but I feel that confidence is a major issue for us. This is something we will definitely have to work on in our next topic. ...read more.