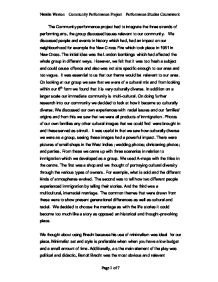 The aim was to create a play that would provoke thought and raise awareness of the issues surrounding immigration not only for the audience but also the actors. When, we decided to use Brecht

The Community performance project had to integrate the three strands of performing arts, the group discussed issues relevant to our community. We discussed people and events in history which had, had an impact on our neighbourhood for example the New Cross Fire which took place in 1981 in New Cross. The initial idea was the London bombings which had affected the whole group in different ways. However, we felt that it was too fresh a subject and could cause offence and also was not site specific enough to our area and too vague. It was essential to us that our theme would be relevant to our area. On looking at our group we saw that we were of a cultural mix and from looking within our 6th form we found that it is very culturally diverse. In addition on a larger scale our immediate community is multi-cultural. On doing further research into our community we decided to look at how it became so culturally diverse. We discussed our own experiences with racial issues and our families' origins and from this we saw that we were all products of immigration. Photos of our own families any other cultural images that we could find were brought in and these served as stimuli. It was useful in that we saw how culturally diverse we were as a group, seeing these images had a powerful impact. There were pictures of small shops in the West Indies; wedding photos; christening photos; and parties. ...read more.

To show this, to remove any confusion and to distance the audience, captions written on placards which where used and shown to the audience. HEATHROW AIRPORT 1970 This was a device originally used by Erwin Piscator and then subsequently by Brecht. We found it particularly challenging to incorporate the three art forms. For inspiration we watched Lea Andersons' Cross channel. We liked the way she stylised everyday movements, for example, there were 4 dancers who mimed picking up grass and rolling it in their hands it was very obvious what they were doing. It was effective in that the moves did not create any feeling because there was no doubt as to what the dancers where doing as they were familiar, everyday movements. This would hence reinforce and compliment Brecht's distancing technique. It was crude yet effective. We decided at this point to choreograph the dances for the piece in this manner. We took this idea and integrated literal, stylistic and abstract everyday movements. In the dinner scene where 3 everyday movements which were stylised into phrases of movement. The first motif's was the picking up of the menus which were done in canon with a full extension of the right arm going back and over the shoulder to the table. The next two were done in unison as synchronised movement looking through the menu. We also synchronised and putting hand to chin in an undecided manner these motifs were repeated alternately. The next scene was the airport scene and within it we had monologues from the three immigrants: Maria, Ruby and Augustus. ...read more.

This made it look spontaneous on stage. After the first improvisation we would reflect on what we had come up with and then decide on if we would cut anything out or add any bits. We also used a rehearsal technique of forum theatre where another actor steps into someone else's character to show their idea, we also often did rehearsals in the third person to distance ourselves from the character and to ultimately understand the character more as when just being the actor it is easy to just think of yourself as the character. As the process progressed the statement of intent of the piece changed. We found that it was almost impossible to show just the positives of something. It becomes sweetened truth. So it changed that we wanted to show the harder side of being an immigrant and the controversy that it brings. This was better anyway because it meant that the audience would understand how far society has come but then also how far we have to go. The performance space was alien to us as we had never been there before let alone performed there. It was a long and thin room with high ceilings so the acoustics where not very good, the backdrop was a multicoloured sheet with lighting behind coming through which was very ethnic and effective. We put up posters in the university and the surrounding areas of New Cross but it just so our audience was a mixture of people. i Taken from a Brecht Dictionary found on the internet ?? ?? ?? ?? Natalie Weston Community Performance Project Performance Studies Coursework Page 1 of 7 ...read more.