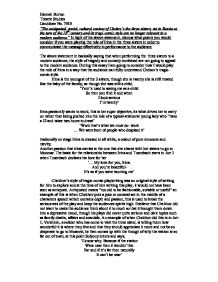 &quot;The antiquated, scoial, cultural context of Chekov's the three sisters, set in Russia at the turn of the 19th century and its tragi-comic style are no longer relevant to a modern audience&quot;, discuss the points you would consider playing the role of Irina.

rather than being pushed into the role of a typical aristocrat young lady who "rises a 12 and takes two hours to dress" 'Work that's what we must do- work ... We were born of people who despised it' tradionally on stage Irina is dressed in all white, a colour of pure innocene and nievity. Another passion that irina carries is the one that she shares with her sisters to go to Moscow. The basis for the relationshio between Irina and Tusenbach starts in Act 1 when Tusenbach declares his love for her '... My love for you, Irina. ...read more.

I believe that Chekhov did not want to make the audience think about it to much so that it brought them down into a depressive mood, though his plays did cover quite serious and dark topics such as family deaths, affairs and scandals. An example of when Chekhov did this is in Act 1, Vershinin, a solider who has come to visit the three sister, is telling them how wonderful it is where they live and that they should appreciate it more and not be so desperate to go to Moscow, he then comes up with the though of why the station is so far out of town, at this point Solyony enters and says; 'I know why. ...read more.