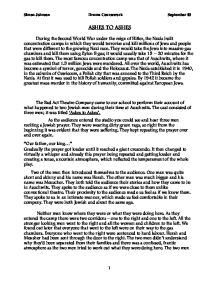 The Bad Act Theatre Company came to our school to perform their account of what happened to two Jewish men during their time at Auschwitz. The cast consisted of three men; it was titled 'Ashes to Ashes'.

ASHES TO ASHES During the Second World War under the reign of Hitler, the Nazis built concentration camps in which they would terrorise and kill millions of Jews and people that were different to the growing Nazi race. They would take the Jews into massive gas chambers and kill them using Zylon B gas; it would usually take 15 - 20 minutes for the gas to kill them. The most famous concentration camp was that of Auschwitz, where it was estimated that 1.5 million Jews were murdered. All over the world, Auschwitz has become a symbol of terror, genocide and the Holocaust. The Nazis established it in 1940, in the suburbs of Oswiecem, a Polish city that was annexed to the Third Reich by the Nazis. At first it was used to kill Polish soldiers and gypsies. By 1942 it became the greatest mass murder in the history of humanity, committed against European Jews. The Bad Act Theatre Company came to our school to perform their account of what happened to two Jewish men during their time at Auschwitz. The cast consisted of three men; it was titled 'Ashes to Ashes'. As the audience entered the studio you could see and hear three men reciting a Jewish prayer. ...read more.

He wakes the men up and orders them into what I believe was a mine. "Jews, if you do not work you will fucking die." His words bitter and cruel, which reflects his attitude and personality. He is wearing a green military suit and carries a metal stick which he repetitively hits these two metal sheets. At first it is unclear what these sheets represent, but you can see that as he hits them the two men react as if they have been beaten. In my opinion this method of demonstrating the men being beaten is very effective. The timing of the soldier hitting the metal sheet and the reaction of the two men was near to perfect. If the soldier hit the bottom of the sheet the men would react as if they had been hit on the legs and if he hit the top as if they had been hit on the upper regions of their bodies. Also the sound of the metal bar making contact with the metal sheets was loud and powerful, so this method of dramatising punishment really got the audience to understand the horrific punishment that these two men felt. SET DESIGN I think this simple set design is very effective, as it doesn't let the audience get distracted by scene change. ...read more.

Every day knowing that you were going to get beaten and tortured. Towards the end I found myself feeling the pain that these helpless men were feeling, and I think that fact alone demonstrates how powerful this play was. I even felt a sense of relief when Hersh and Meusher got sent to the gas chamber. The ordeal was over; no more torture. I think the aim of this production was to enable the audience to get an image in their heads of what life was like for these poor innocent Jews in Auschwitz concentration camp. In my opinion they succeeded. I think thy used basic acting techniques e.g. mime and the metal sheets to emphasise the suffering and torture that these people experienced. You really found yourself feeling for these helpless men. I personally really got taken back by this production and was amazed how effective it really was. I think my only criticism of the play was the fact that maybe we didn't learn enough about the characters, which meant at times they felt like total strangers, yet we were moved when they were tortured and finally killed. The torture may have had an even bigger effect on the audience had we'd felt like we knew them. Overall I think this was a very successful production, you really did get a sense on how horrific Auschwitz concentration camp really was. Simon Johnson Drama Coursework September 03 1 ...read more.