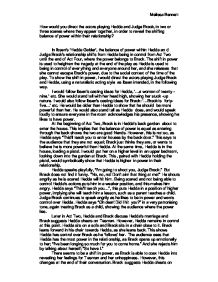 The Balance of Power Between Hedda and Brack

How would you direct the actors playing Hedda and Judge Brack, in two or three scenes where they appear together, in order to reveal the shifting balance of power within their relationship? In Ibsen's 'Hedda Gabler', the balance of power within Hedda and Judge Brack's relationship shifts from Hedda being in control from Act Two until the end of Act Four, where the power belongs to Brack. The shift in power is used to heighten the tragedy at the end of the play as Hedda is used to being in control of everything and everyone around her, and she releases that she cannot escape Brack's power, due to the social context of the time of the play. To show the shift in power, I would direct the actors playing Judge Brack and Hedda, using a naturalistic acting style as Ibsen intended, in the following way. I would follow Ibsen's casting ideas for Hedda, '...a woman of twenty-nine.' etc. She would stand tall with her head high, showing her stuck-up nature. ...read more.

Hedda says "Oh dear! Did I hit you?" in a very patronising tone, again treating Brack as a child, showing the audience where the power lies. Later in Act Two, Hedda and Brack discuss Hedda's marriage and Brack suggests Hedda cheats on Tesman. However, Hedda remains in control at this point. Hedda sits on a sofa and Brack sits in a chair close to it. Brack leans forward in his chair towards Hedda, as she leans back. This shows Hedda has control over Brack as he 'follows' her. The audience sees that Hedda has the most power in the relationship, as Brack opens up emotionally to her; "I've been longing so much for you to come home." And she rejects him by talking about herself; "So have I." There seems to be a shift in power, as Brack is able to coax Hedda into revealing her feelings for Tesman and her unhappiness. However, this changes at the end of their conversation. Brack suggests Hedda cheats on Tesman using a metaphor. ...read more.

The power clearly belongs to Brack as he leans down to her and says "No, Hedda Gabler. Not as long as I hold my tongue." Brack would smile suggestively, showing he is blackmailing her and that he is in complete power. The audience knows that Brack is in control as he says "Yes a scandal. The thing you're so frightened of." He would stand with his legs shoulder-width apart, arms crossed, standing upright, showing he is confident in himself and that the balance of power has shifted completely to him. Brack reassures Hedda that he is not blackmailing her, but his actions say differently as he gets closer and closer to her and begins to whisper. Hedda speaks nervously, avoiding Brack's eyes as she realises her weaker position. At the end of the play, we believe the power in the relationship belongs to Brack, as he has control over Hedda and she is unable to escape this. However, the fact that Hedda commits suicide shows us that she has escaped; she has taken control over her own fate and therefore is still the most powerful in the relationship. Melissa Bennett ...read more.