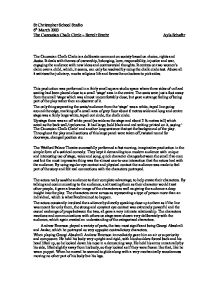 St Christopher School Studio 6th March 2003 The Caucasian Chalk Circle - Bertolt Brecht Ayla Schafer The Caucasian Chalk Circle is a deliberate comment on society based on choice, rights and Justice. It deals with themes of ownership, belonging, love, responsibility, injustice and war, engaging the audience with new ideas and controversial thoughts. It centres on two women's claim over a child, which, it seems, can only be resolved by using the chalk circle test. Above all it satirises the judiciary, mocks religious life and forces the onlookers to pick sides. This production was performed in a fairly small square studio space where three sides of unfixed seating had been placed close to a small 'stage' area in the centre. The seats were just a foot away from the small 'stage which was almost uncomfortably close, but gave a strange feeling of being part of the play rather then an observer of it. The only thing separating the seats/audience from the 'stage' was a white, taped line going around the edge, marking off a small area of grey floor about 6 metres wide and long and centre stage was a fairly large white, taped out circle, the chalk circle. Up-stage there was an off white panel (as wide as the stage and about 2 1/2 metres tall) which acted as the back wall/cyclorama. It had large, bold black and red writing printed on it, saying ' The Caucasian Chalk Circle' and another long sentence that set the background of the play. Throughout the play small sections of this large panel were taken off, twisted round for doorways, changed position etc. The Watford Palace Theatre successfully performed a fast moving, imaginative production in the simple form of a satirical comedy. They kept it demanding to a modern audience with unique and interesting use of stage, voice and song, quick character changes between the small five-man cast but the most impressive thing was the almost one-to-one interaction that the actors had with the audience. ...read more.

She did this mainly by showing such embellished emotion through her face and voice, and although her body was not used and much as it could have been it did not appear to matter. She never once was neutral and the emotions that she did were incredibly moving to watch and really made a connection and understanding between her character and the audience. She used nearly every part of her face to portray how Grusha was feeling and she most effectively used her eyes and her eyebrows. Strange as it may sound, her large extent to which she moved her eyebrows really added to the effect. For example, they would lift up and widen her eyes, opening her face ad letting a look of pure pleasure beam out, or they could sink right down, creasing her forehead and wrinkling up her eyes so she squinted angrily out. True emotion, even of an actor can be spotted in the eyes but Vanessa Havell acted so well that even her eyes gave nothing away and expressed what Grusha should be expressing. As there was so much eye contact between the actors and the audience, 'eye acting' worked so well because there was not hint of 'Vanessa Havell' to betray her character so made her all the more believable. She spoke with a Scottish accent and had a very soft pure voice, but at the same time very clear and powerful. Every word spoken from her mouth was full with feeling and portrayed Grusha and very honest and wholesome, and made her very touching to listen to. As mentioned earlier, her body was only used very basically, so she did not do many large exaggerated movements and seemed quite contained. Instead of this looking like bad acting, it looked more like it was part of Grusha's uncomplicated shy character. She stood very composed and upright, and walked with the same unapparent grace. ...read more.

For example Governors and the Prinze wore very elaborate dazzling red robes, which were trimmed with white lining, and looked very expensive and luxurious because they were made out of silky material and were the only bright colours throughout the play. Which showed their rich status. Grusha wore an old looking patterned dress with a brown corset and a faded green shawl. This showed off her femininity but also that she was not very well off. Similarly the other peasants wore dull coloured and old looking clothes. The soldiers wore large brown or green trench coats, which made them, appear as massive looming shadows, adding to the terrorizing effect they had on the other characters and the audience. Sound effects, music and song were used beautifully and effectively throughout the production, directed by Andrew Friesner. Loud clanging, bells and drumming was used for tense moments or to create a sense of panic and chaos. Instruments like the violin and the accordion were strikingly played to set certain moods alongside the acting and the actors own voices were frequently used to sing songs that narrated the story or just stirring melodies. The haunting harmonies that the voices created really moved the audience by evoking emotion in them, and effectively assisted the actors. The Watford Palace Theatre successfully performed the Caucasian Chalk Circle in its best way, a suspenseful, creative production in the simple but original form of a satirical comedy. The play is too comic and knowing to strike that note of severity and preaching would have made an audience overly comfortable, as if requires them to merely sit back and quietly take orders. So To a modern audience it was kept demanding with unique and interesting use of stage, voice and song, regular character changes and the impressive 'one-to-one' interaction that the actors had with the audience and while doing this it still brought across the strong messages of justice, what you deserve will come to you. ...read more.