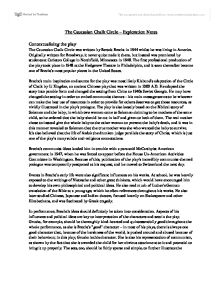 The Caucasian Chalk Circle - Exploration Notes Contextualising the play The Caucasian Chalk Circle was written by Bertolt Brecht in 1944 whilst he was living in America. Originally written for Broadway, it never quite made it there, but instead was premiered by students at Carleton College in Northfield, Minnesota in 1948. The first professional production of the play took place in 1948 at the Hedgerow Theatre in Philadelphia, and it soon thereafter became one of Brecht's most popular pieces in the United States. Brecht's main inspiration and source for the play was most likely Klabund's adaptation of the Circle of Chalk by Li Xingdao, an ancient Chinese play that was written in 1300 A.D. He adapted the story into parable form and changed the setting from China to 1940s Soviet Georgia. He may have changed the setting in order to embed communist themes - his main message seems to be whoever can make the best use of resources in order to provide for others deserves to get those resources, as vividly illustrated in the play's prologue. The play is also loosely based on the Biblical story of Solomon and the baby, in which two women came to Solomon claiming to be mothers of the same child, so he ordered that the baby should be cut in half and given to both of them. ...read more.

Gestus, an acting technique developed by Betolt Brecht himself, is a way of revealing to the audience the feelings and motivations of a character by exhibiting very specific behaviours that would illustrate these things. For example, if a character constantly checked if his wallet was still in his pocket whilst checking the time, it would imply that he's a busy man who places a lot of importance on money - a rich man. Checking his wallet and checking the time are the actions that the audience would form this conclusion from, therefore they are his Gestus. Space is also invaluable in communicating feelings between characters to the audience. If two characters are far apart when having what should be a fairly personal conversation, it implies that they're somewhat cold and distant to one another, whereas if they were close together, it would imply quite the opposite. Text Azdak: She looks pretty well fed to me. Pull! The First Lawyer: What did I say! The bonds of blood! Azdak: What's the matter with you? You didn't pull! Grusha: I didn't hold on to him. Your worship, I take back everything I said against you. I ask your forgiveness. If I could just keep him until he can speak properly. He knows only a few words. Azdak: Don't influence the court! ...read more.

Aural elements can include music played by actors, background music, sound effects, dialog and any other noises that may be made on stage. Background music can be used to set the tone of a scene, sound effects can be short and sharp noises made by objects being used or struck. Dialog is definitely the most important aural element, as it features in the vast majority of plays; it conveys messages, shows the feelings of characters and is able to evoke emotions in the audience. The musicians in my class got together to create a soundtrack for certain parts of this play in order to fully understand the importance of aural elements - we created a tense song for a tense time in the play, a jaunty, happy tune for a more light-hearted scene and a russian-themed tune for a quintessentially Georgian scene. Spacial elements are the type of stage used, the locations and levels of stage entrances and exits, and the space between actors and their surroundings. Some of the class designed sets for the play and were judged, similarly to the costumes, on how they would complement the action, and how they reflect what's happening in the play. ...read more.