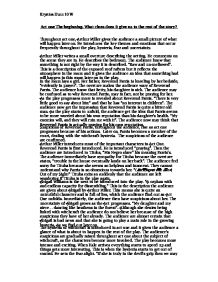 The Crucible Act one The beginning - What clues does it give us to the rest of the story?

Act one The beginning. What clues does it give us to the rest of the story? Throughout act one, Arthur Miller gives the audience a small picture of what will happen later on. He introduces the key themes and emotions that occur frequently throughout the play, hysteria, fear and uncertainty. Arthur Miller writes a small overture describing the setting. He comments on the scene they are in. He describes the bedroom. The audience know that something is not right by the way it is described. "Raw and un-mellowed". This is a description of the exposed roof rafters but it reflects the atmosphere in the room and it gives the audience an idea that something bad will happen in this room later on in the play. In the room lays a girl. Her father, Reverend Parris is kneeling by her bedside, "evidently in prayer". The overture makes the audience wary of Reverend Parris. The audience know that Betty, his daughter is sick. The audience may be confused as to why Reverend Parris, may in fact, not be praying for her. ...read more.

Immediately, the audience then have suspicions about her. The uncertainty of Abigail grows as the Act progresses. "My daughter and my niece... dancing like heathens in the forest". Although she denies being linked with witchcraft the audience do not believe her because of the high suspicions they have of her already. The audience are almost certain that Abigail is bad news and that she is going to play a main role in the growing hysteria. As we find out later on. The hysteria of witchcraft is introduced in act one and it gives the audience a glance of what is about to happen in the rest of the play. The audience's suspicions are gradually raised throughout act one about the subject of witchcraft, as the characters become more involved. The play becomes more intense and exciting. When Hale arrives everything starts to speed up and things gets more interesting. This is when the hysteria starts to get out of control. He sets the fear alight. "If she is truly in the devil's grip then we may have to rip and tear to get her free." This frightens many. ...read more.

She is different to everyone else who is white. Parris also describes her as a "dumb beast" this shows he does not have any respect for her and the way he treats at the start also shows this "Out of my sight!" Tituba is a prime target for the witchcraft hysteria. At the end of the play Betty and Abigail start chanting names. We see the fear and much of the hysteria coming out at the end of act one and this gives the audience a quick glance of what is yet to come. The audience may wonder. If this is happening at the start of the play what is in store for the rest? The beginning of Act One in the Crucible holds the key to the rest of the play it gives you an insight to what is about to happen and really unfolds the story for you. The beginning does give you clues to the rest of the story and because of this, the audience are feeling tension and excitement, leaving them desperate to know what will happen later on. Krystina Dunn 10 W ...read more.