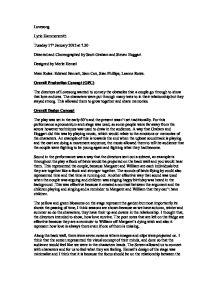 The directors of Lovesong wanted to convey the obstacles that a couple go through to show that love endures. The characters were put through many tests to in their relationship but they stayed strong.

Directed and Choreographed by Scott Graham and Steven Hoggart

The directors of Lovesong wanted to convey the obstacles that a couple go through to show that love endures. The characters were put through many tests to in their relationship but they stayed strong. This allowed them to grow together and share memories.

The play was set in the early 60’s and the present wasn’t set traditionally. For this performance a proscenium arch stage was used, so some people were far away from the actors however techniques was used to draw in the audience. A way that Graham and Hoggart did this was by playing music, which would relate to the emotions or memories of the characters. An example of this is towards the end when the upbeat soundtrack is playing and the cast are doing a movement sequence, the music allowed them to tell the audience that the couple were fighting to be young again and fighting what they had become.

Sound in the performance was a way that the directors sent out a subtext, an example is throughout the play a flock of birds would be projected on the back wall and you would hear them. This represented the couple, because Margaret and William are each individuals but they are together like a flock and stronger together. The sounds of birds flying by could also represented time and that time is running out. Another effective way that sound was used when the couple was arguing and children was singing happy birthday was heard in the background .This was effective because it created a contrast between the argument and the children playing and singing and a reminder to Margaret and William that they can’t have children.

The yellow and green blossoms on the stage represent the garden but most importantly its shows the passing of time, I think seasons are shown because as we have autumn, winter and summer so do the characters, they have their up and downs in the relationship. I thought that, the directors intended to show, how love survive. The post notes that are left on the fridge are effective because they are a reminder to William off Margaret’s dying wish and also it represent how love is always there even if one of them is missing.

Along the back wall, there were seven screens where images and clips were projected on. I think that the screen represented the visual concept of their minds, and done so that the audience would feel like we were in the characters heads. The Screen allowed us to connect with characters and for us to feel what they are feeling. Hensel’s design of the stage was minimalist and I think that it is because the focus should be on the relationship between the two characters, William and Margaret. Also if the set had been complicated it wouldn’t allow the characters to move freely and interact with each other. An example is when the younger couple is dancing around the stage.

For me Costume didn’t have a huge impact on the performance, however it did show the attitudes towards woman. As time progressed Margaret dressed from a dress to a smart suit and this was unusual because in the time that the play was set woman had to stay at home and look after children but we know that Margaret couldn’t have children. The clothes that the older couple wore were modern to show that they are in the present day. A key costume was the blue shirt that Margaret picked out for William to wear near the end of the performance because the younger William’s was wearing it as well, I thought that this was done to show how Margaret wanted things to be how they were when they was younger and to remind her of these times.

Throughout the play the lighting was bright but towards the end it became dim, this implied that Margaret’s life was slipping away it could also represent that even though it seemed the love had died out deep down they both know that is still there and always be there. I found the green light effective that would come up when the characters were in the garden, this was good because they didn’t  need a wall to partition different rooms, they used the light to ‘tell’ the audience. Like the set, the lighting didn’t create a distraction because the performance was to show the relationship.

Margaret (younger) and Maggie’s (older) pace was different from each other this was because of age, Margaret seemed to be more faster when talking and also in her movements, however Maggie was slower but when she was remembering something from her past her pace would start picking up again, this showed how she wants to live the life she was living before.

When the performance finished when looking at the leaflet, I saw that the directors had made a few changes to the script, this could have been to make the play slicker and adapt to the target audience. The play was an emotional performance and a moment that stood out to me is when all four characters were on stage in the bed doing a movement to the upbeat music which got louder this showed that the relationship was a battle but they soldiered through it and became stronger.