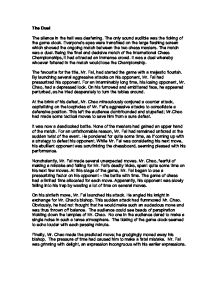 The Duel The silence in the hall was deafening. The only sound audible was the ticking of the game clock. Everyone's eyes were transfixed on the large flashing screen which showed the ongoing match between the two chess masters. The match was a duel. Being the final and decisive match of the International Chess Championships, it had attracted an immense crowd. It was a duel whereby whoever faltered in the match would lose the Championship. The favourite for the title, Mr. Fai, had started the game with a majestic flourish. By launching several aggressive attacks on his opponent, Mr. Fai had pressurized his opponent. For an interminably long time, his losing opponent, Mr. Chao, had a depressed look. ...read more.

He pondered for quite some time, as if coming up with a strategy to defeat his opponent. While Mr. Fai was considering his next move, his ebullient opponent was scrutinizing the chessboard, seeming pleased with his performance. Nonchalantly, Mr. Fai made several unexpected moves. Mr. Chao, fearful of making a mistake and falling for Mr. Fai's deadly tricks, spent quite some time on his next few moves. At this stage of the game, Mr. Fai began to use a pressurizing factor on his opponent - the battle with time. The game of chess had a limited time allocated for each move. Apparently, his opponent was slowly falling into his trap by wasting a lot of time on several moves. On his sixtieth move, Mr. Fai launched his attack. He angled his knight in exchange for Mr. Chao's bishop. ...read more.

The pressure of time had caused him to make a fatal mistake. Mr. Fai was grinning with delight, an expression incongruous with his earlier expressions. With lightning speed, he executed his next move, placing his pawn in the position previously occupied by his opponent.. Mr. Chao's face immediately contorted into a grimace. He was on tenterhooks. Ironically, due to his cautiousness, he had placed himself in an unredeemable situation. IN a fleeting moment, Mr. Fai had altered the entire texture of the game to assure him of an eventual victory. With his opponent's bishop away, Mr. Fai was able to attack his king. By skillful manipulation of his opponent's presumption that he would be using a complicated strategy, Mr. Fai had capitalized on this to mask his move. By now, his opponent has realized the implications of his move. However, it was too late. "Checkmate!" bellowed Mr. Fai. The duel was over. ...read more.