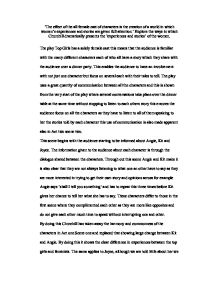 'The effect of the all female cast of characters is the creation of a world in which women's experiences and stories are given full attention.' Explore the ways in which Churchill dramatically presents the 'experiences and stories' of the women. The play Top Girls has a solely female cast this means that the audience is familiar with the many different characters each of who all have a story which they share with the audience over a dinner party. This enables the audience to have an involvement with not just one character but focus on several each with their tales to tell. The play uses a great quantity of communication between all the characters and this is shown from the very start of the play where several conversations take place over the dinner table at the same time without stopping to listen to each others story this ensures the audience focus on all the characters as they have to listen to all of them speaking to her the stories told by each character this use of communication is also made apparent also in Act two scene two. ...read more.

We learn a lot about Joyce's feelings about life when she talks to Kit about herself and her daughter, she obviously regretted leaving school as when she considers her life now, 'I didn't like it, and look at me.' The language used throughout this seen also makes a great impact on the audience as it is mainly two teenagers talking to each other interrupting and raising their voices to impress each other as they fight to say what they have to say first. An example of this is through the strong uses of swear words throughout this scene, one such example is through the usage of the word 'cunt' as this word is also seen as very harsh when said especially when said by a woman to a woman and is therefore strange to see it said in a book based on feminist themes. It seems like by using it Churchill is attempting to remove it from a forbidden status to make it a more commonly used word therefore to remove its offensiveness towards the population of women. ...read more.

It is Isabella who suggests sympathy from the audience by retelling her story of her loss of the death of Nugent and her sister Hennie. But her character is also presented by Churchill as judgemental and challenging, and who constantly interrupts others conversations. Her dialogue is both troubling and confrontational as the audience undergoes irritation and uneasiness with her as they also feel a respect for her love of independence and femininity despite sharing in travelling a role considered for men. All of these events wrap the audience in a maze of compassion; this is however broken by her often materialistic and negative attitude to such things as fashion and clothes. This diverse image allows the audience to consider whether these women really are 'Top Girls' and more drastically whether they are feminists or simply just determined but often self-seeking women who wanted to live their life exactly as they wanted to. Feminism is often considered about equality but the audiences question is whether these women have worked for the greater good of females of simply for themselves. ...read more.