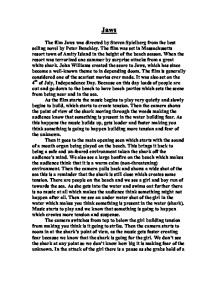 The film Jaws was directed by Steven Spielberg from the best selling novel by Peter Benchley.

Jaws The film Jaws was directed by Steven Spielberg from the best selling novel by Peter Benchley. The film was set in Massachusetts resort town of Amity Island in the height of the beach season. When the resort was terrorized one summer by surprise attacks from a great white shark. John Williams created the score to Jaws, which has since become a well-known theme to in depending doom. The film is generally considered one of the scariest movies ever made. It was also set on the 4th of July, Independence Day. Because on this day loads of people are out and go down to the beach to have beach parties which sets the scene from being near and in the sea. As the film starts the music begins to play very quietly and slowly begins to build, which starts to create tension. Then the camera shows the point of view of the shark moving through the weeds making the audience know that something is present in the water building fear. As this happens the music builds up, gets louder and faster making you think something is going to happen building more tension and fear of the unknown. ...read more.

We hear the man calling for his dog then a 'long shot' of the sea is used we see no dog but just its stick floating in the water. So the audience suddenly presume that the dog has been eaten by the shark which creates fear. The next camera angle that is used is the shark's calling card the 'under water shot'. This is of legs kicking in the water the audience automatically think the shark is present which makes the audience afraid for the people in the water. The attack is seen in a 'very long shot' so we still don't see the size of the shark. Brody realises what is happening and a general panic occurs which is seen in a 'long shot' this shows the scale of the panic which makes the audience more afraid. The last shot that is used in this attack is a 'medium long shot' of the lilo washing up on the beach, the one that had been attacked. There is no music and it is calm this is a kind of silence for the dead and showing that the threat has gone. ...read more.

Until it came down to last minute, Brody one on one with the shark. As the shark approached, Brody was shooting at it and missing consecutively which creates fear and tension because the audience think the shark is going to get Brody if he keeps missing. Then at the last second Brody shoots hits the canasta in the shark's mouth and it blows up killing the great white. This relieves the tension that has been building up making the audience give a sigh of relief. And the film finishes with a happy ending as Brody and the ocean biologist swimming into shore. I think the scariest moment of the film was when the shark was in the pond heading towards Brody's son Michael. Because throughout the film the audience have got to know the family and when the shark was heading towards Michael a lot more tension. Fear and empathy was created because the audience are afraid of what the shark will do to him. Because at this point you have seen what damage it can do which makes the audience a lot more afraid of the shark and a lot more afraid for Michael. BY Chris Blow ...read more.