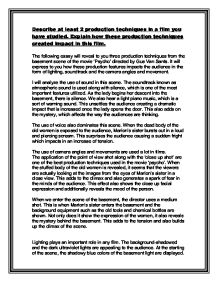 The following essay will reveal to you three production techniques from the basement scene of the movie 'Psycho' directed by Gus Van Sants. It will express to

Describe at least 2 production techniques in a film you have studied. Explain how these production techniques created impact in this film. The following essay will reveal to you three production techniques from the basement scene of the movie 'Psycho' directed by Gus Van Sants. It will express to you how these production features impacts the audience in the form of lighting, soundtrack and the camera angles and movement. I will analyze the use of sound in this scene. The soundtrack known as atmospheric sound is used along with silence, which is one of the most important features utilized. As the lady begins her descent into the basement, there is silence. We also hear a light piano music, which is a sort of warning sound. ...read more.

The application of the point of view shot along with the 'close up shot' are one of the best production techniques used in the movie 'psycho'. When the stuffed body of the old women is revealed, it seems that the viewers are actually looking at the images from the eyes of Marion's sister in a close view. This adds to the climax and also generates a spark of fear in the minds of the audience. This effect also shows the close up facial expression and additionally reveals the mood of the person. When we enter the scene of the basement, the director uses a medium shot. This is when Marion's sister enters the basement and the background equipment such as the old tools and chemical bottles are shown. ...read more.

It also affects the viewers by continuingly creating a sense of danger. The bright white lights establish the main objects of the film. When the old ladies decayed face is exposed to the camera, bright light is used to highlight the significance of it. This enables the audience to prepare themselves for a conclusion of what ever the issue was. At this moment the tension and the climax of the scene is at it's highest. To conclude, the impacts created by the production techniques are very efficient. The techniques I have used are lighting, soundtrack and camera angles and movement which all help in increasing the tension and adding to the climax. They also individually produce other impacts such as fear, mystery and even humor. Without the availability of these production features, movies and films would not be the same. ?? ?? ?? ?? ...read more.