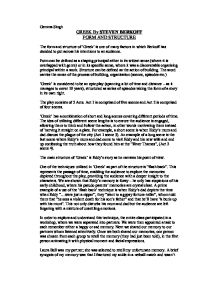 The form and structure of 'Greek' is one of many factors in which Berkoff has decided to put across his intentions to an audience.

Gemma Singh GREEK By STEVEN BERKOFF FORM AND STRUCTURE The form and structure of 'Greek' is one of many factors in which Berkoff has decided to put across his intentions to an audience. Form can be defined as a shaping principal either in its widest sense (where it is overlapped with genre) or in its specific sense, where it was a discoverable organising principal within a work. Structure can be defined as the action of building. The word carries the sense of the process of building, organisation (scenes, episodes etc.) 'Greek' is considered to be an epic play (spanning a lot of time and distance - as it manages to cover 10 years), structured as series of episodes taking the form of a story in its own right. The play consists of 2 Acts. Act 1 is comprised of five scenes and Act 2 is comprised of four scenes. 'Greek' has a combination of short and long scenes covering different periods of time. ...read more.

"went to a gypsy fortune-teller", whom told them that "he sees a violent death for his son's father" and that he'll have "a bunk-up with his mum". This not only disturbs his mum and dad but the audience are left lingering with a mixture of unsettling emotions. In order to explore and understand this technique, the entire class participated in a workshop, where we were separated into partners. We were then appointed a task to each remember either a happy or sad memory. Next we shared our memory to our partners whom listened attentively. Once we both shared our memories, one person was chosen from each group to retell the memory (they had just been told), in the first person animating it with physical moment and facial expressions. Laura Bell was my partner; she was selected to retell my unfortunate memory. A brief synopsis of my memory was that I fractured my ankle in a netball match and wasn't able to partake in a fun filled netball trip for a weekend. ...read more.

Also the play consists of a prologue, introducing the play, giving the audience an insight to Eddy's life as well as setting the scene. Berkoff usually minimises props and sets and liberally uses costumes, lights and physical theatre. In particular to 'Greek' on stage there is a kitchen table and four chairs (which function in a number of ways - from the platform for the Sphinx to the caf�). The use of the table and chairs is to merely define spaces and act as a base for the actors to spring from. The walls are three square upright white panels, indicating Greek classicism. The actors' faces are painted white reefing to Greek statues. The style of minimising and props and sets etc. can be interpreted that the audience focuses on the actual acting. The use of physical theatre is very dramatic and striking. An example, of Berkoff's style of physical theatre can be seen when Eddy and the manager of the caf� (Eddy's real father) engage in a verbal fight - where they mime the fight, "haemorrhage, rupture and swell. Split and crack lock, jaw sprung and neck break". This is just as engaging for the audience. ...read more.