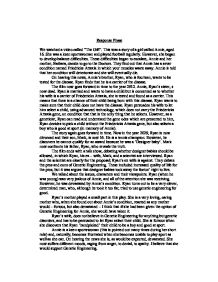 'The Gift' and 'Frankenstein' - Response, Development and Evaluation

Response Phase We watched a video called "The Gift". This was a story of a girl called Annie, aged 16. She was a keen sportswoman and played football regularly. However, she began to develop balance difficulties. These difficulties began to escalate, Annie and her mother, Barbara, decide to go to the Doctors. They find out that Annie has a sever condition named Friedricks Attaxia in which your muscles waste away. Annie is told that her condition will deteriorate and she will eventually die. On hearing this news, Annie's brother, Ryan, who is fourteen, wants to be tested for the disease. Ryan finds that he is a carrier of the disease. The film now goes forward in time to the year 2012. Annie, Ryan's sister, s now dead. Ryan is married and wants to have a child but is concerned as to whether his wife is a carrier of Friedericks Attaxia, she is tested and found as a carrier. This means that there is a chance of their child being born with this disease. Ryan wants to make sure that their child does not have the disease. Ryan persuades his wife to let him select a child, using advanced technology, which does not carry the Friedericks Attaxia gene, on condition that that is the only thing that he selects. However, as a geneticist, Ryan can read and understand the gene odes which are presented to him, Ryan decides to pick a child without the Friedericks Attaxia gene, but also selects a boy who is good at sport (in memory of Annie). The story again goes forward in time. Now in the year 2029, Ryan is now divorced and their son, Mark, is now 16. He is a tennis champion. However, he discovers he cannot qualify for an award because he was a 'Designer baby'. Mark now confronts his father, Ryan, who reveals the truth. ...read more.

We all had different views, some people believed that animal testing should be banned completely, I disagree as if animal testing was not allowed, drugs for a variety of conditions would not be discovered. Another belief is that all animal testing should be allowed, I again disagree with this as I think testing cosmetics on animals is unnecessary. This suggests that there are at least two sides to every argument. We decided to develop a piece of improvisation which was different to our previous work because it will not be realistic. We have decided to do this to grab the audience's attention and to represent an alternative point of view for this subject. We made the following decisions during our planning: * We decided that animals would talk, not the humans/scientists. This will create a role reversal, in which the audience are shown the animal's thoughts and feelings. The main aim for this was to turn the audience's sympathy towards the animals, to understand that animals have feelings and emotions as well as humans. * Animals voices, words and movements - we decided to vent each animal's emotions through these, e.g. a scared animal would be on edge, very alert and would speak very quietly, voice breaking occasionally. To demonstrate the lack of space that the animals are given, we decided to bunch up the characters, with one pacing backwards and forwards in a small space to demonstrate boredom. * Scientists' movement, body language, speech - we decided to limit the scientist's movement. It was freer than that of the animals but each scientist followed a set path. This was to create an inhuman atmosphere (role reversal - humans - almost as animals). To add to this atmosphere we decided to limit the speech of humans to animal-like grunts. This would create the same mystery for the audience as to what each scientist was saying as it does when we hear animals communicate. ...read more.

After this we discussed how to improve it, we then rehearsed again. We then planned the middle - a conversation between the travellers and future people - and used the same method of rehearsing. We again did this for the ending - one future characters fatal gene being activated. We decided to raise issues such as the fatal gene because we feel that it is a very realistic option of future society. We ended the play with a death - the activation of the fatal gene is just a part of everyday life for the future people, however the travellers are shocked. Our play aimed to show the audience that although science can be used to our advantage, we can take it too far and end up ruining life as we know it. We were successful because it made people think more clearly about modern science. I felt I learned a lot during the workshop. My views about Science vs. Nature are that science is good and can be used to our advantage, to a certain extent. However, if we are not careful we are going to destroy our individuality and the world around us. As a result of the drama texts, I have learned that sometimes the use of medical science and animal testing is essential in order to save human lives. I feel that the experiences I gained were valuable. I learned how the use of light and sound can affect the mood, tension and overall view that the audience has of a play. I also learned that exaggeration of body language and expression is the key to dramatic performance, as it instantly lets the audience see your mood and character. Overall, I feel that I have learned a great deal from this workshop. Not only about modern science, but also how to co-operate in a group situation and how to compromise with ideas. I have learned that you need to be prepared to listen to and accept the views of others. I have also broadened my range of acting skills ...read more.