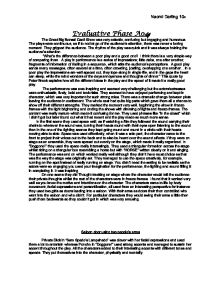 The Great Big Bonsai Cacti Show was very eclectic, confusing but engaging and humorous. The plays were continuous, as if to not let go of the audience's attention, there was never a boring moment.

Evaluative Phase A04 The Great Big Bonsai Cacti Show was very eclectic, confusing but engaging and humorous. The plays were continuous, as if to not let go of the audience's attention, there was never a boring moment. They gripped the audience. The rhythm of the play was quick and it was always holding the audience's attention. "What's the difference between a poor play and a good one? I think there is a very simple way of comparing them. A play in performance is a series of impressions; little dabs, one after another, fragments of information of feeling in a sequence, which stirs the audience's perceptions. A good play sends many messages, often several at a time, often crowding, jostling, overlapping one another... in a poor play the impressions are well spaced out, they lope along in single file, and in the gaps the heart can sleep, while the mind wonders of the days annoyances and thoughts of dinner." This quote by Peter Brook explains how all the different ideas in the play and the speed of it made it a really good play. The performance was awe-inspiring and seemed very challenging but the actors/actresses were enthusiastic, lively, bold and took risks. ...read more.

It was inspiring. On one scene they did Thought-tracking on stage where the character would tell the audience their private thoughts whilst the rest of the characters were in freeze frames. I found that it worked very well as you knew the motive and intentions on the character. The characters came to life by body movement, facial expressions and personification, all used from an interesting perspective for instance they used two girls as doors leading into a saloon. With their arms as doors their then controlled who went into the saloon and who didn't. For particular characters they would swing their arms a little then push them backwards so they couldn't get in which was very amusing. Saloon door using two people's arms Private Dick in "Sam Spade's Lampshade" was clever with her facial expressions and used them a lot to entertain whereas Poncho in "Doggone!" used strong accents and managed to sustain her accent throughout the play. All the characters added to their interesting accents with different tones and speeds. They put themselves into the character, physically and mentally. They used a lot of Focus, Laban and The Seven states of Tension to build their characters especially Californian. ...read more.

It had a slight American historical film influence; one of the plays "Doggone!" was like a detective film. Overall it was very cosmopolitan. The final ending of the play unraveled the play and left you feeling overly satisfied. If I was the director the only thing I would change was the use of space, I would have done theatre-in-the-round, it would give the audience a chance to see everyone's different reactions. In our lesson we did a workshop on the evaluative phase and did some freeze frames to show the different reactions people had to the play. We named ours 'faces in the dark". After the freeze frame we did a breathing exercise with the lights off laying on the floor, we were asked questions about the performance and thought about the answers to them quietly. This was then followed by an exercise called consequences in which we were given some paper and we were asked a question and we wrote down our answer then passed the sheet around and answered another question until we had went through all the questions. I found this really helpful as when we were given this task we could go and read the sheets and see not only our response to the play but others as well. Naomi Darling 10H ...read more.