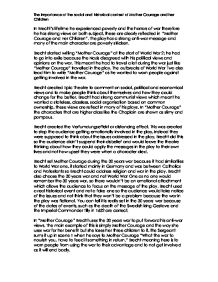 In Brecht's lifetime he experienced poverty and the horrors of war therefore he has strong views on both subject, these are clearly reflected in "Mother Courage and Her Children". The play has a strong anti-war message and many of the main character are poverty stricken. Brecht started writing "Mother Courage" at the start of World War 2; he had to go into exile because the Nazis disagreed with his political views and opinions on the war. This meant he had to travel a lot during the war just like "Mother Courage" travelled in the play. The outbreaks of World War Two also lead him to write "Mother Courage" as he wanted to warn people against getting involved in the war. Brecht created Epic Theatre to comment on social, political and economical views and to make people think about themselves and how they could change for the better. Brecht had strong communist views which meant he wanted a stateless, classless, social organisation based on common ownership, these views are reflect in many of his plays. ...read more.

The main example of this is simply Mother Courage and the way she uses war for her benefit but she loses her three children to it, the Sergeant sums it up in scene 1 when he says to Mother Courage "What the war to nourish you, Have to feed it something in return." Brecht meaning here is to warn people from using the war to their advantage and to not get involved as it will end badly. Brecht used a different sort of staging to dramatic theatre. This was to remind the audience that they were in the theatre, he didn't want them to get too involved in the story. Brecht did this by using drama mediums. Set Brecht's set was very bare and simple. It didn't have any backdrop or many props. If he wanted to show a place he would use only a few object to symbolise it e.g. if the characters were walking through a forest he would have a few branches on stage to symbolise the forest. ...read more.

Gestus is a combination of gesture and social meaning into one movement, stance or vocal display. It is not realistic so the audience doesn't feel emotions. It often used to show social meaning. An example of gestus is when Kattrin puts on Yvette's red boots, this shows her characters sexual frustration. Brecht wants his actors to present their characters in a way that was not an impersonation. He wanted the actors to come out of character or break the fourth wall by talking or going into the audience. This was to stop the audience getting emotionally attached to the characters. "Mother Courage and Her Children" is a reflection of Brecht's life and experiences. He lived in poverty, through a war and had to travel around this is reflected in "Mother Courage". Brecht also puts across his views in "Mother Courage and her Children." The message of Mother Courage will always be relevant as there will always be war and people will always try to make a profit from other people's suffering. ?? ?? ?? ?? The importance of the social and historical context of Mother Courage and her Children ...read more.