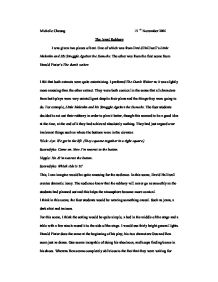 Michelle Cheung 15th November 2001 The Jewel Robbery I was given two pieces of text. One of which was from David Halliwell's Little Malcolm and His Struggle Against the Eunuchs. The other was from the first scene from Harold Pinter's The dumb waiter. I felt that both extracts were quite entertaining. I preferred The Dumb Waiter as it was slightly more amusing than the other extract. They were both comical in the sense that all characters from both plays were very unintelligent despite their plans and the things they were going to do. For example, Little Malcolm and his Struggle Against the Eunuchs. The four students decided to act out their robbery in order to plan it better, though this seemed to be a good idea at the time, at the end of it they had achieved absolutely nothing. They had just argued over irrelevant things such as where the buttons were in the elevator. Wick: Aye. We get in the lift. (They squeeze together in a tight square.) Scrawdyke: Come on. Now I'm nearest to the button. Nipple: No Ai'm nearest the button. ...read more.

They both seem quite nervous and alert about their job. Though they are precautious, they don't seem to think about what the messages might mean. For instance, the matches that were sent to them. The two men don't think about what message they were being sent, instead it leads to an argument about kettles. This also creates an atmosphere of humour for the audience. I imagine the two men would be wearing comfortable clothing, maybe a T-shirt and shorts as they would not really be leaving their basement room much, and were most probably just in bed the majority of the time. If I was directing this play, I would set the scene as Pinter had suggested: Scene: A basement room. Two beds, flat against the back wall. A serving hatch, closed, between the beds. A door to the kitchen and lavatory, left. A door to a passage, right. I would use dim general lights. My piece of improvised work is quite similar to both extracts; a couple of my characters were quite amusing. ...read more.

We wanted our whole piece to be comical, and at the same time with a bit of action. For example the movement scene and the shooting scene at the end. We hoped we could build up to the climax by having a lot of panicking and shouting before suddenly dying. Evaluation. Over all I think the performance went according to plan. The lighting in the second scene didn't go as well as we'd hoped it would, as the front right light wouldn't work, and the lighting was not on the right people at the right time. In the end we managed to get everything together, such as our music for the movement scene. Sounding went as planned; I think it worked quite well. We were quite worried the gunshot wouldn't work in the fourth scene when Clarissa shot Mishe, but we were hoping it would shoot and luckily it did. Though I think we could have slowed the whole piece down a little bit by not rushing as much. The performance went quite well, but I feel we could have done better if we had practised a little more! ...read more.