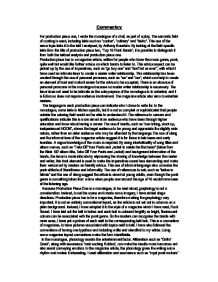 Commentary For production piece one, I wrote the monologue of a chef, as part of a play. The semantic field of cooking is used, including lexis such as "cooker", "culinary" and "bistro". This use of the same topic links it to the text I analysed, by Anthony Bourdain. By looking at the field specific lexis from the title of production piece two, "Top 10 Punk Bands", it is possible to distinguish it from both the textual analysis and production piece one. Production piece two is a magazine article, written for people who know the music genre, punk, quite well but would like further advice on which bands to listen to. This advice aspect can be picked up by the use of imperatives, such as "go buy one" and "don't let us ever", with which I have used an intimate tenor to create a reader writer relationship. This relationship has been created through the use of personal pronouns, such as "we" and "our", which can help to create an element of trust and make it easier for the advice to be accepted. There is an absence of personal pronouns in the monologue because no reader writer relationship is necessary. ...read more.

Instead, to set the scene and create some imagery, I have added stage directions. Production piece two is for a magazine, therefore making the graphology very important. It is not an entirely conventional layout, as the article is not set out in columns on a plain background. Instead, I have adapted it to the style of a magazine which I have read, Rock Sound. I have laid out the text in boxes and each box is coloured brightly as bright, fluorescent colours can be associated with the punk genre. So the readers can recognise the bands with more ease, I have put a picture of each next to the corresponding text box. This is a convention of magazines, to have pictures associated with topics next to text. I have also followed the conventions of having one typeface and including a title and standfirst to my article. Using some magazine layout conventions make the form identifiable. In the monologue, phonology assists the entertainment factor. Alliteration such as "Grillin' Grant", along with assonance "rusk sucking Robbie", can make the insults more humorous and also assist conveying emotion. In the magazine article, the phonology gives the writing some rhythm and makes it interesting. ...read more.

Rhetorical questions can create humour and increase the intimacy of the tenor. Similes, such as "controversial as Christmas with the in-laws" are also used to create humour and entertain the reader. The tense does change many times in production piece two, this happens because some bands are current and some have split up. The readers would be able to understand this with basic knowledge of the bands mentioned. Tense can also change in the monologue, when the character refers to past events and uses anecdotal events, something easy for the listeners to pick up on. Sentences are varied in the monologue, shorter sentences are determiners used to create certainty of emotions, others are long and descriptive, causing tension to be created and, at other times, gaining audience sympathy. Sentences are sometimes interrupted by fillers, where the character expresses uncertainty or fills a thought when thinking. Sometimes, false starts will occur, where the character falters in her speech and this can add to the sense of failure she is conveying, along with the anger. The language is quite colloquial, words are omitted and sentences are disjointed or incomplete sometimes, making the speech seem more spontaneous. To show where she will have brief pauses, I have included sentences that are disconnected by three full stops, and where the character is to stress a word I have made it italic. ...read more.