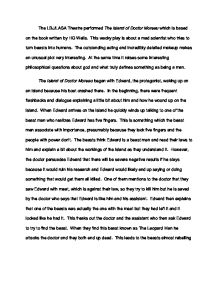 The LBJ/LASA Theatre performed The Island of Doctor Moreau which is based on the book written by HG Wells. This wacky play is about a mad scientist who tries to turn beasts into humans.

The LBJ/LASA Theatre performed The Island of Doctor Moreau which is based on the book written by HG Wells. This wacky play is about a mad scientist who tries to turn beasts into humans. The outstanding acting and incredibly detailed makeup makes an unusual plot very interesting. At the same time it raises some interesting philosophical questions about god and what truly defines something as being a man. The Island of Doctor Moreau began with Edward, the protagonist, waking up on an island because his boat crashed there. In the beginning, there were frequent flashbacks and dialogue explaining a little bit about him and how he wound up on the island. When Edward arrives on the island he quickly winds up talking to one of the beast men who realizes Edward has five fingers. This is something which the beast men associate with importance, presumably because they lack five fingers and the people with power don't. ...read more.

This leads to the beasts almost rebelling because they decide that if the doctor is dead then so is the law, but Edward says the doctor is up in the sky watching them. The acting was very good and many of the actors did a good job of staying in character. I liked that several of the actors tried to speak in a British accent the entire time. In the scene where the doctor was killed I liked that although everything was a little chaotic and the characters were panicking, what was going was still clear. I didn't like that on several occasions you could tell very easily that the fighting was fake. Lastly, I felt like everyone wasn't sad enough when the doctor was killed, I would have definitely expected the assistant to be more upset than she was, but probably not the monsters since the doctor did whip them. ...read more.

I can't really think of a sound effect other than the metronome which did an awesome job of showing that the doctor was crazy. The costumes and makeup were far and away my favorite, especially the one beast who jumped out at the audience. Also, I liked the leopard, because it seemed almost monstrous but yet still a little human like. The play was outstanding, and I really enjoyed it. One of my favorite things was the excellent makeup, costumes, and props because those did a good job of making it seem real, well as real as a story about turning ferocious animals into humans can seem. Regardless, the excellent acting, which was far above what I was expecting for a high school performance, helped to keep the audience engaged in the odd plot of this story. However, by far my favorite part of this theatrical production was the philosophical questions it raised. PS: I might have gotten the names confused since I didn't have a program. ...read more.