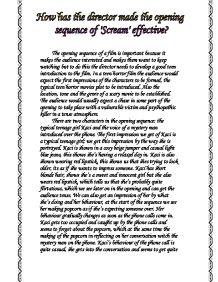 The opening sequence of the film Scream.

The opening sequence of a film is important because it makes the audience interested and makes them want to keep watching but to do this the director needs to develop a good teen introduction to the film. In a teen horror film the audience would expect the first impressions of the characters to be formed, the typical teen horror movies plot to be introduced. Also the location, tone and the genre of a scary movie to be established. The audience would usually expect a chase in some part of the opening to take place with a vulnerable victim and psychopathic killer in a tense atmosphere. There are two characters in the opening sequence: the typical teenage girl Kaci and the voice of a mystery man introduced over the phone. The first impression we get of Kaci is a typical teenage girl; we get this impression by the way she is portrayed. Kaci is shown in a cosy beige jumper and casual light blue jeans, this shows she's having a relaxed day in. Kaci is also shown wearing red lipstick, this shows us that shes trying to look older, its as if she wants to impress someone. ...read more.

The characters in the opening sequence tell us it's a typical teenage movie. The genre of this film is a horror film. The genre is introduced by first of all, the house being located in a suburb area, which is deserted. The house is also shown as being big, with large windows and no curtains, which tells us that anyone can look into the isolated house, specially at night and that's the time of day the film was introduced. The characters also play a big part in establishing the genre. This is shown when the man on the phone keeps calling back, which creates a mystery also by the costumes of the characters e.g. Kaci's clothes are what a typical teenager from a scary movie would wear. The music can help create by playing scary music, which changes its pace once tension is created, also to create tension and help establish the genre there's a contrast between high and low notes. The events that take place also help build the genre e.g. the phone call from a mystery man, which later on occurs in the opening. So events, location, characters and music all help and create the genre of the film. ...read more.