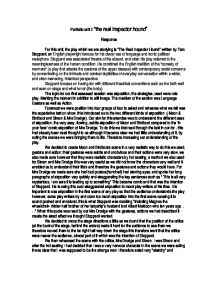 Portfolio unit 2 "the real inspector hound" Response For this unit, the play which we are studying is "The Real Inspector Hound" written by Tom Stoppard, an English playwright famous for his clever use of language and ironic political metaphors. Stoppard was associated theatre of the absurd, and often his play referred to the meaninglessness of the human condition. He combined the English tradition of the "comedy of manners" (a play that attacks the customs of the upper classes) with contemporary social concerns by concentrating on the intricate and comical duplicities of everyday conversation within a wider, and often menacing, historical perspective. Stoppard focuses on having fun with different theatrical conventions such as the forth wall and seen on stage and what is not (the body). The topic for our first assessed session was exposition, the strategise, used were role play, Marking the moment in addition to still image. The medium of the section was Language Gesture as well as Action. Foremost we were position into four groups of four to select and rehearse what we felt was the superlative text on show, this introduced us to the two different kinds of exposition ;( Moon & Birdboot and Simon & Mrs Drudge). Our aim for this exercise was to understand the different uses of exposition; the very easy, flowing, subtle exposition of Moon and Birdboot compared to the 'in your face' comic exposition of Mrs Drudge. ...read more.

this was happening a lot at the time Stoppard wrote this play In our penultimate assessed sessions topic was "Characterisation, Social and Theatrical Context". This play has many characters that are very deep such as Birdoot, when playing him it is important to understand that what he says and what he thinks are very different things for example, I believe our teacher decided this would be our topic as it is important to understand every characters character to truly appreciate this play. The social context of this play refers to why he wrote it when he did , it was a parody to books written by Agatha Christie for example and early 30's and 40's murder mysteries and I also believe it relates to Cluedo characters. Firstly we discussed the similarity between the characters from the book and from the game Cluedo. We then used a forum theatre exercise; volunteers took on one of the roles from the play. We hot seated them to improve the groups understanding of the characters. Avneet (one of the members of the group) took up the part Mrs Drudge, the group then asked her questions such as "why do you cycle to work" and "how old are you". Her answers to these questions helped me a lot as it created a much more three dimensional character and the intricate detail meant I was much more confident in directing her as I knew how she would react two things . ...read more.

At the beginning of the scene only the audience can see the body .These leads to anticipation and suspense as they know someone will find the body eventually. Later on in the scene we placed the characters like you can see below .This was very humorous as they were practically standing on top of the body and still do know notice it . We created the scene in this way to emphesis how much Stoppard was trying to mock the playwrights of his time; this was how unrealistic they were. This also created suspense as the audience knew the characters were just about to discover the body. Stoppard uses fast pace when something is relevant and interesting and a slow pace when it is not. He uses obvious devises to show suspense as this is what stories such as Agatha Christie do to create suspense and he is mocking them. He also uses the same type of language used in stories such as the ones written by Agatha Christie to show the resemblance. Stoppard is pocking fun at this type of drama he is saying that it is over acted, completely un realistic and poorly written.This murder mysteries is purely comic and is not meant to be scary. When writing this play Stoppards intention was to show the dramatic world what he thought of murder mysteries, and also mock the critics, he definitely did this. ...read more.