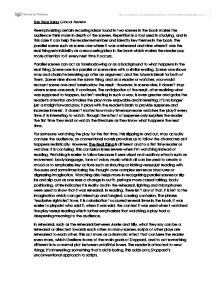 Reemphasizing certain recurring ideas found in two scenes in the book makes the audience think more in depth of the scenes. Repetition is a tool used in studying, and in this case it can help the reader remember and identify key themes in the book. The parallel scene such as scene one where it was a rehearsal and nine where it was the real thing sets infidelity as a reoccurring idea in the book which makes the reader pay more attention to it every next time it occurs.

Parallel scenes can act as foreshadowing or as a background to what happens in the real thing. Scene one is a parallel of scene nine with a similar ending. Scene one shows max and charlotte breaking up after an argument, and the future is bleak for both of them. Scene nine shows the same thing, and as a reader or watcher, you would recount scene one and foreshadow the result. However, in scene nine, it doesn’t stop where scene one ends, it continues. The anticipation of the result, after realizing what was supposed to happen, but isn’t ending in such a way, is even greater and grabs the reader’s attention and makes the play more enjoyable and interesting. It’s no longer just a straightforward play, it plays with the reader’s brain to provide suspense and increase interest.  It doesn’t matter how many times someone watches the play if every time, it is interesting to watch. Though the effect of suspense only surprises the reader the first time they read or watch the literature as they know what happens the next time.

For someone watching the play for the first time, this slipping in and out, may actually confuse the audience, as conventional novels provokes us to follow the characters as it happens realistically. However, The Real Thing is different and to a first time reader or watcher, it is confusing. This confusion is less severe when I’m watching instead of reading. Watching is easier to follow because it uses visual and auditory effects such as movement, body language, tone of voice, music which all can be used to create a mood or to emphasize key actions such as shouting or kicking versus just reading with the eyes and sometimes losing the thought over complex sentence structures or digressing imagination. Watching also helps more in recognizing parallel scenes or slip ins and slip outs as one sees a change in outfit, perhaps more casual talking, body positioning, attire indicates it is reality and in the rehearsal, lighting and microphones were used to show that it was rehearsal. In reading, there isn’t any of that, it is left to the imagination which can get mixed up and tangled, causing confusion. The phrase “exclusive rights isn’t love, it is colonization” occurred several times in the book. It was easier to pinpoint who said it, when it was said, the context it was used when I watched the play versus reading which further emphasizes that watching a play had a deepening meaning to the audience.

In rehearsal, such as the rehearsal between Annie and Billy, what they say can be a rehearsal or directed towards each other. In many scenes, scripts of other plays are rehearsed to each other. This act more as a dramatic effect that confuses the reader even more, which I believe is one of the main goals of Stoppard, and to act something different into a normal plot between unfaithful lovers. The reader is attracted to new things, it’s interesting; something that’s old is boring. This adds onto Stoppard’s unconventional approach to scripts.

After watching the play, I thought the written text was so much more sophisticated than when I read it. Stoppard seems to be a master of English. When reading, you are limited to your world and imagination, but when watching the play, you open up to new ideas of other people. In this case, their enactment was slightly different from what I had envisioned of the characters such as Brody, Billy, and Max. Brody seemed much more rude, Max, less cowardly, Billy, less immature actually.